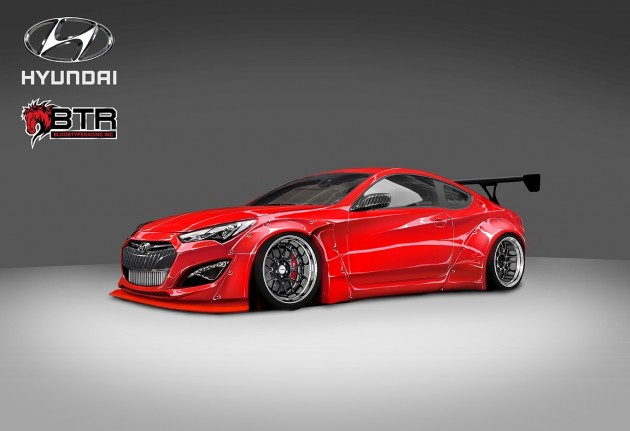 Wait, something about that list doesn’t seem right. Who put the Genesis in a list with other performance cars that reach over 1,000 horsepower? Blood Type Racing Inc (BTR) did!

For the 2014 Specialty Equipment Market Association (SEMA) Auto Show, BTR is promoting underground racing with a modified 2014 Hyundai Genesis Coupe. With aspirations of reaching 1,000 horsepower,  the modification experts at BTR have our interest in the SEMA show perked. Who wouldn’t want to see a 1,000 Horsepower Hyundai Genesis Coupe?

Will BTR Deliver on Its Mission of a 1,000 Horsepower Hyundai Genesis?

The Korean automaker has partnered with BTR to milk a 2014 Hyundai Genesis for nearly 1,000 horsepower from the vehicle’s 2.0-liter 4-cylinder engine. In order to achieve this turbo-charged state, you’ll be seeing the following additions on the 1,000 Horsepower Hyundai Genesis Coupe:

The model will send over 800 horsepower to the rear wheels (nearly 1,000 horsepower at the crank) through a six-speed manual transmission.

Despite the fact the Genesis Coupe will be discontinued as we see the 2015 models enter the scene (which is no surprise considering the Elantra just lost its coupe version too), Hyundai believes an explosive 1,000 horsepower finish to the coupe version is a fitting ride into the sunset.

“Our focus on this vehicle was to build on the impressive performance abilities of the Genesis Coupe and help the growth of the aftermarket tuner community,” said Sam Lee, product manager, Blood Type Racing Inc. “It’s easy to add lots of power to an engine, but we engineered all other aspects of the vehicle – cornering and handling, stopping power, and visual appearance – to complement the massive horsepower we’re now getting from the engine. We’ve engineered a true, total package Genesis Coupe.”

We are suffering from some déjà vu here. This isn’t the first time a modification team attempted to pump 1,000 horsepower out of a  Genesis Coupe, actually. Last year, Hyundai partnered with Bisimoto to achieve the same thing. Apparently, if you want to draw attention, attempt the same stunt all over again.

For those interested in keeping up with the progress on the 1,000 horsepower Hyundai Genesis and the brand’s highlights in the show, follow #HyundaiSEMA.

Prepare to see the BTR 1,000 Horsepower Hyundai Genesis Coupe, along with a 708-hp Sonata by Bisimoto and a 550-hp Genesis by ARK Performance, during the SEMA show Scheduled November 4th – 7th.