The Transformers are back (and luckily, Shia LaBeouf is not) in Michael Bay’s latest action-packed thriller, Transformers: Age of Extinction. And what would the Transformers franchise be without Chevrolet? (Answer—a movie not worth watching.)

The Camaro will return to Transformers: Age of Extinction as Bumblebee yet again. Bumblebee the Camaro Transformer has been with the franchise from the beginning, appearing in Transformers (2007), Transformers: Revenge of the Fallen (2009), and Transformers: Dark of the Moon (2011). The latest installment will feature two Camaros specifically built for the film: a modified 1967 Camaro SS and a futuristic Camaro concept.

The Camaro is the perfect car to depict the Transformer known as Bumblebee, who is capable, reliable, and a bit of a smart aleck

The film will also feature a Corvette Stingray that converts to Crosshairs, as well as a Trax and a Sonic that has been outfitted as a Rally Car. 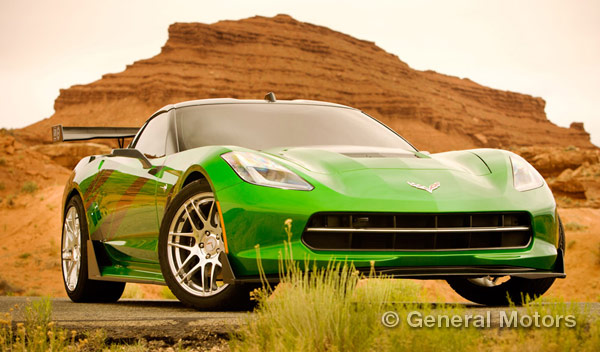 The Corvette Stingray will play the Transformer Crosshairs in the summer blockbuster Transformers: Age of Extinction.

“The Transformers movies have been a great partnership for Chevrolet by allowing us to introduce our vehicles to new fans, young and old, around the world,” said Tim Mahoney, chief marketing officer, Global Chevrolet. “Now for the fourth time, you’ll see a Camaro as a heroic Autobot, a fitting role for one of the stars of Chevrolet’s lineup.”

“The Chevrolet partnership with this iconic Michael Bay movie franchise has become one of the longest-running and most innovative movie-brand relationships in film history,” added LeeAnne Stables, executive vice president of Worldwide Marketing Partnerships for Paramount Pictures. “This new Chevy campaign will definitely bring new and exciting elements to a global audience of Transformers movie fans around the world.”

Chevrolet’s involvement with Transformers: Age of Extinction doesn’t stop at the cars featured, however. GM also provided filming locations for the movie: GM Design at the Warren Technical Center, the Lansing Grand River Assembly plant, and the Milford Proving Ground.