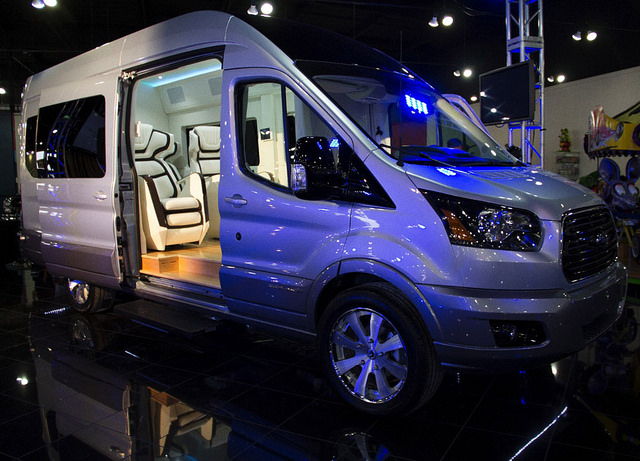 Ford recently gave us a close look at the Ford Transit Skyliner Concept ahead of the New York International Auto Show, where it will debut. Ford described the new concept as a “private jet on wheels,” and with good reason. The all-new Ford Transit Skyline Concept revolutionizes ultra-premium land transportation.

The Transit Skyliner is capable of transforming (but no, not in the Michael Bay way) into four different and dramatic modes, which include business, reception, theater, and travel. These modes all feature movable, custom-designed “throne” seats that reposition automatically. And oh yeah, did we mention they’re controlled by a smartphone or tablet? 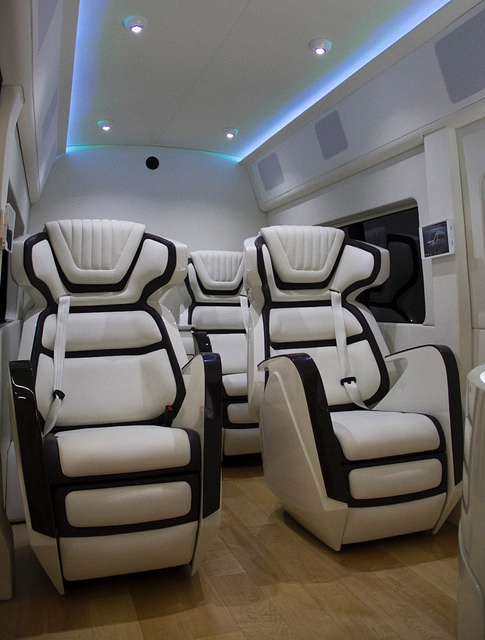 The Ford Transit Skyliner Concept features an interior that is integrated into a Crestron automation system that occupants control with smart devices. Perhaps most impressive for the Skyliner is the entertainment system, which features Focal Utopia 7.2 surround sound with speakers specifically designed for this model (in France, to boot), as well as a KVH DIRECTV satellite for HD TV and a Kaleidescape media server that carries so much storage space that drivers could easily fit the equivalent of 1,000 DVDs or 3,000 Blu-Ray movies on it.

An added bonus: drivers can serve their passengers refreshments through a built-in bar.

“Traveling in Transit Skyliner is an experience unlike any other,” explained Tim Stoehr, Ford manager for commercial truck marketing. “You step into the vehicle and are immediately immersed in the custom interior and high-tech audiovisual environment. The next thing you know, you are arriving at your destination.”

Stoehr added, “Transit Skyliner is the ultimate expression of a custom Transit. We created the vehicle to highlight the potential of the Ford Transit platform for the limousine market and to showcase Transit as the next generation of modern, cool, fuel-efficient vans.”

Other elements to note for the Ford Transit Skyliner Concept

Look out for the Ford Transit Skyliner Concept when it debuts this week in New York!