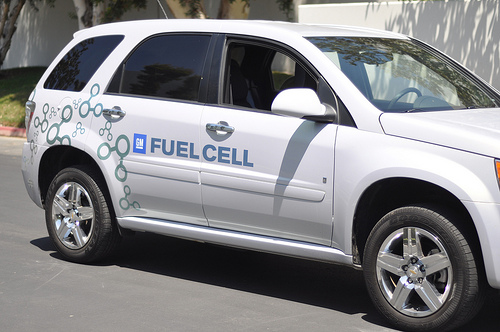 You may remember about a decade ago when fuel cell technology was all the rage and automakers were touting it as the fuel of the future. Then, the economy came to a stop and so did the fuel cell cars—at least most of us thought it had.

Now that the auto industry is getting back on track, alternative fuel technology is on the rise once again, sparking the future of the hydrogen fuel cell car. General Motors and Honda have even teamed up to work on fuel cell technology together. Can you believe that? The auto giants even say they never actually stopped working on the technology. In fact, together the two companies have filed over 1,200 fuel cell patents between 2002 and 2012.

In a press release, Dan Akerson, GM chairman and CEO, said, “This collaboration builds upon Honda and GM’s strengths as leaders in hydrogen fuel cell technology. We are convinced this is the best way to develop this important technology, which has the potential to help reduce the dependence on petroleum and establish sustainable mobility.”

Both companies actually already have fuel cell vehicles on the road. Honda has the FCX Clarity and GM has a fuel-cell version of the Chevrolet Equinox. Both vehicles are only available in strictly limited quantities and in highly-specific markets where the infrastructure already exists, i.e. Southern California.

Sarah Mahan currently lives in the Bicycle Capital of the Midwest, Xenia, Ohio, with her band director husband and two darling daughters. She loves all things French and the written word.

Sarah writes professionally for the automotive industry. While her forte in cars focuses on new vehicle technology and family-friendly features, she is developing a love for all things fast, maybe in an attempt to get to know her wild side. See more articles by Sarah.