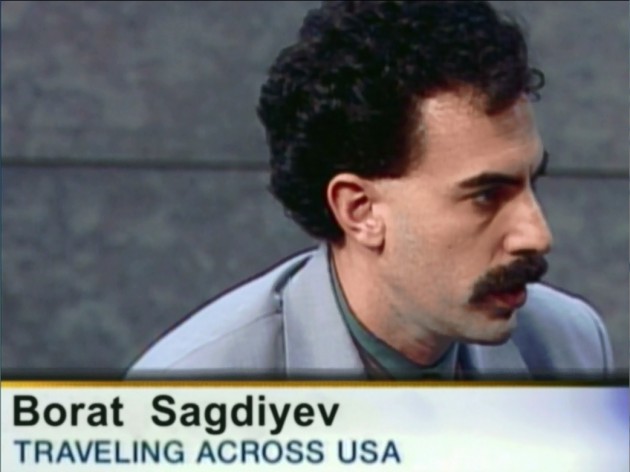 It’s been a long time since I first saw Borat, but I still remember how inescapable the film was when it debuted in 2006. Its star, British comedian Sacha Baron Cohen, had been playing the character (inspired by a Russian doctor he once met) for years on Da Ali G Show, which aired first in 2000 on Channel 4 in the UK and then from 2003 to 2006 on HBO.  But the clueless Kazakh reporter did not truly become a household name until Cohen teamed up with former Seinfeld writer Larry Charles, who directed him to mega-stardom in the mockumentary Borat: Cultural Learnings of America to Make Benefit Glorious Nation of Kazakhstan.

I was 16 when this movie came out, and I can recall that for a brief period of time it was nearly impossible to spend more than 30 minutes in my high school without hearing someone with a fake accent exclaiming “is-a very niiice,” or quoting one of Borat’s other catchphrases. But it wasn’t just the kid who sat in front of me in homeroom: critics across the country raved about Borat, and it even earned a nod from the Academy with a nomination for Best Adapted Screenplay (which it lost to The Departed).

Eight years later, I wondered how Borat would hold up. Cohen’s following films (Bruno, The Dictator) came and went with less fanfare, and his comedic approach (filming real-life interactions while in character with unsuspecting interview subjects) had become more common in the following years. So it was with some uncertainty that I polished off my old DVD copy and rewatched Borat for our road trip movie series. 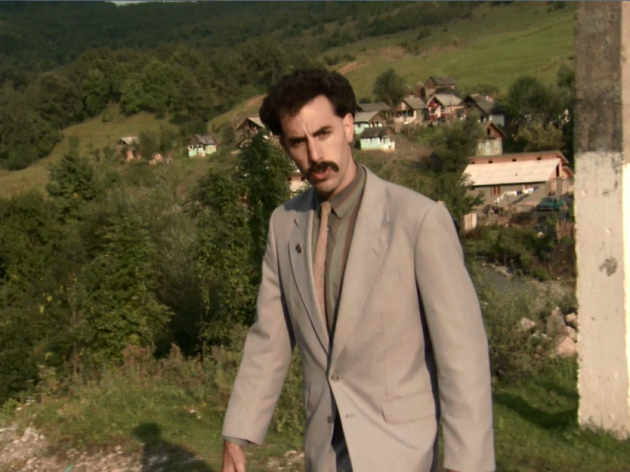 Borat in his home village in Kazakhstan (actually filmed in Romania)

The film opens with cheerfully bigoted Kazakh television personality Borat Sagdiyev giving the film crew a tour of his village; introducing them to quaint fixtures of the community such as “the town rapist” and “the number 4 prostitute in all of Kazakhstan,” who just happens to be his sister.

Borat admits that while he loves his Central Asian country, it has some problems (“economic, social, and Jew”), so he travels to America with his producer, Azamat Bagatov, to learn what makes the United States so great.

First Borat visits New York, to accost strangers riding the subway with kisses (traditional Kazakhstani greetings are apparently very affectionate), wash his clothes in the pond in Central Park, and defecate in front of Trump Tower.

While flipping through the channels in his hotel room, he comes across some Baywatch reruns and falls in love with the paragon of American beauty, Pamela Anderson. 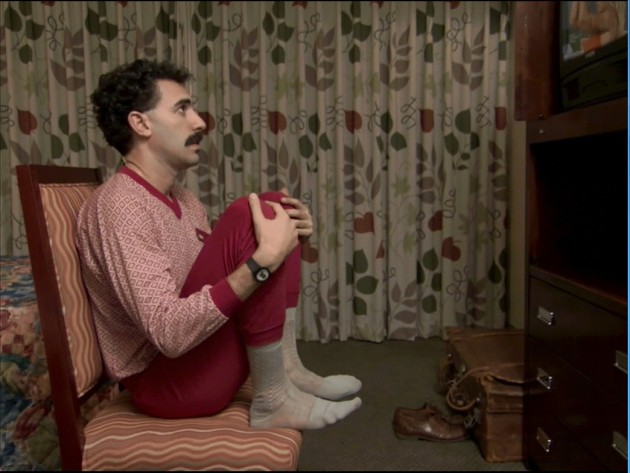 After learning via telegram that his wife was killed in a vicious bear attack (and high-fiving the courier who delivered that wonderful news to him), a newly single Borat decides to go to California and make sexytime with Anderson. Without revealing his true motive, he convinces his producer that they should film the rest of their documentary in the Golden State. Azamat insists that they drive rather than fly (“in case the Jews repeat their attack of 9/11”), and you know what that means: ROOOOOOOAAAADD TRRIIIIIIIIIIIIP!!!!!

After a quick driving lesson, Borat goes to a dealership in Maryland to find the ideal car for his journey. Although the salesman steers him towards a Hummer, the $52,000 SUV is slightly out of his $600-650 price range, so instead he settles on a dilapidated old ice cream truck. 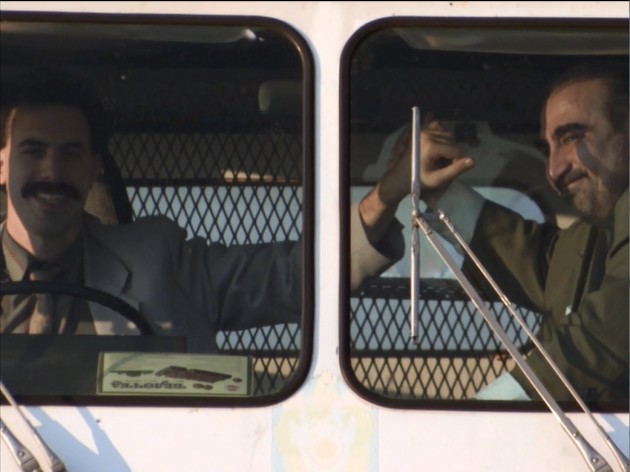 What follows is a variety of hilarious interviews and encounters with American citizens (most of whom live below the Mason-Dixon Line) who have varying degrees of tolerance for Borat’s behavior. Highlights include Borat inciting boos as he sings his country’s national anthem at a rodeo in Salem, Virginia (sample lyric: “Kazakhstan is the greatest country in the world/All other countries are run by little girls”), breaks Confederate antiques and tries to pay for them with pubic hair in Dallas, Texas, and gets thrown out of a Birmingham, Alabama dinner party when an overweight black prostitute named Luenell shows up as his date for the evening. 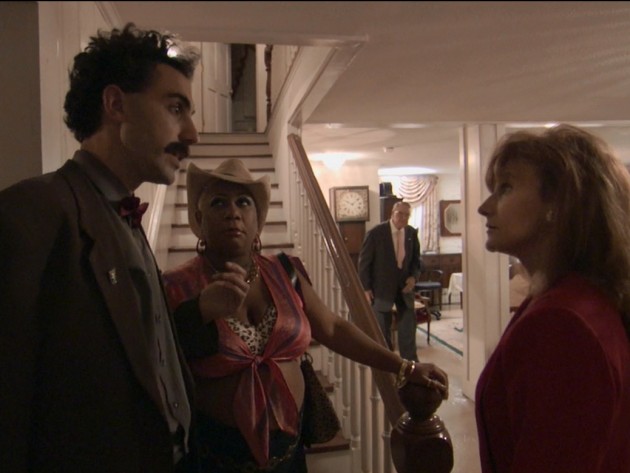 The road trip hits a major speed bump one night when Borat finishes taking a bath and walks out to find Azamat spread out naked on their hotel bed and “making hand-party” while looking at his Baywatch magazine. An enraged Borat attacks, and what follows is a very lengthy, very naked, very homoerotic, and very hairy fight scene that is forever etched into the memories of every person who saw this film.

The day after their nude fight, Azamat takes off (with their passports, money and bear in tow), leaving Borat only the ice cream truck, the chicken, and his beloved Baywatch magazine.

When he runs out of gas, Borat abandons the ice cream truck and hitches a ride with three University of South Carolina frat brothers who are spring-breaking in a rented RV. The douches treat Borat to some drinking games while they lament the fact that women aren’t slaves here in the US, and claim that “minorities have the upper hand” here in America (these poor white college students would no doubt be partying in an even bigger RV if not for the American system that oppresses them and their fellow brethren). 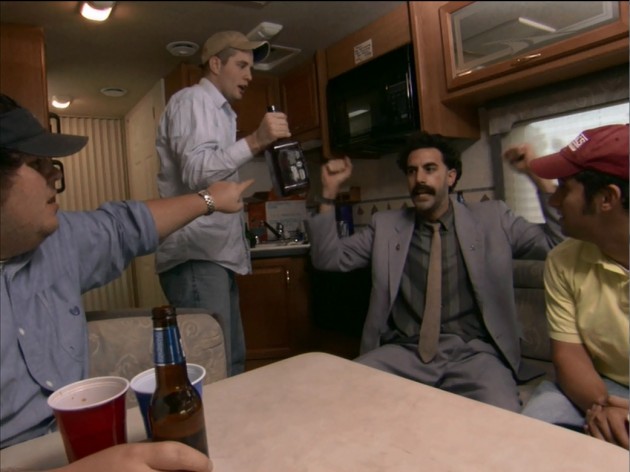 The bros show Borat the infamous Pamela Anderson-Tommy Lee sex tape, leaving him heartbroken at the realization that Anderson is not the chaste virgin he had imagined her to be. But when Borat finds Jesus at a Pentecostal revival, he realizes he must forgive her.

Borat finally arrives in Hollywood, California, where he finds Azamat dressed as Oliver Hardy and panhandling in front of Grauman’s Chinese Theater. They reunite and go to a Pamela Anderson autograph signing, where Borat asks for Anderson’s hand in marriage. She politely declines, but in Kazakhstan, her consent is not required, so Borat quickly throws a traditional wedding sack over his bride-to-be and tries to kidnap her (don’t worry, this part of the movie is staged). Borat is, of course, tackled by security and forcefully taken away from his beloved Pamela. 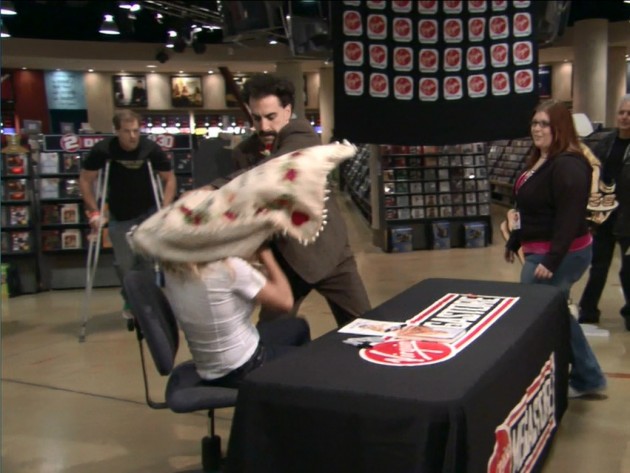 “I had come to America to learn lessons for Kazakhstan, but what had I learned?” Borat asks at the end of his long road trip. “I had learned that if you chase a dream, especially one with plastic chests, you can miss the real beauty in front of your eyes,” he says, realizing that it was Luenell who he had loved all along. He marries her and takes her back to his village in Kazakhstan, where he puts into practice the lessons he learned in America.

When Borat leaves his small Kazakh village, he is taxied to the airport in a horse-drawn 1988 Dacia 1310, which is being driven by a cigarette-smoking 12 year old. 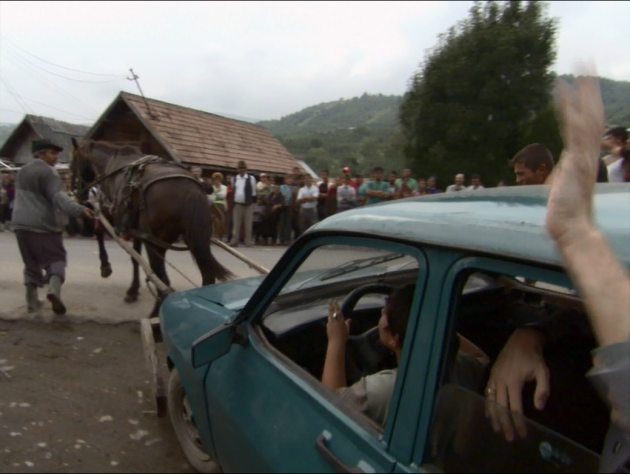 This Dacia has exactly one horsepower

Once Borat realizes he must drive to California to consummate his burning passion for Pamela Anderson, he learns how to drive in a 1999 Ford Escort. Borat is shocked to see female drivers sharing the road with him, continually steers the car towards children, and offers some vodka to driving instructor Michael Psenicska during the lesson. 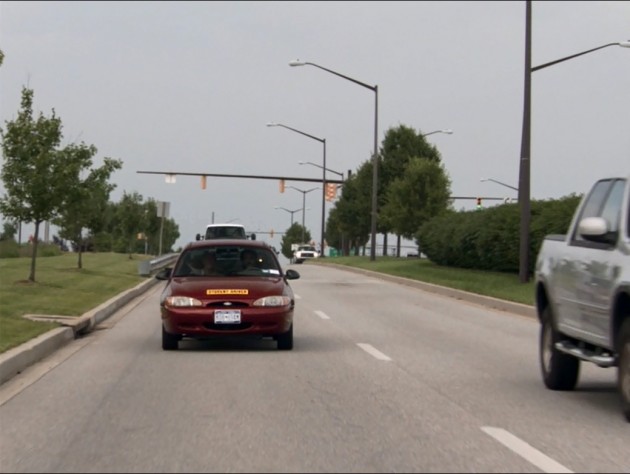 The 1999 Ford Escort that Borat learns to drive in.

Psenicska is remarkably patient with Borat and acquits himself quite well in the film, although he is one of the many participants who later sued Cohen after the film was released (for the record though, he wasn’t offended by his portrayal, he just thought he deserved more money for his role). 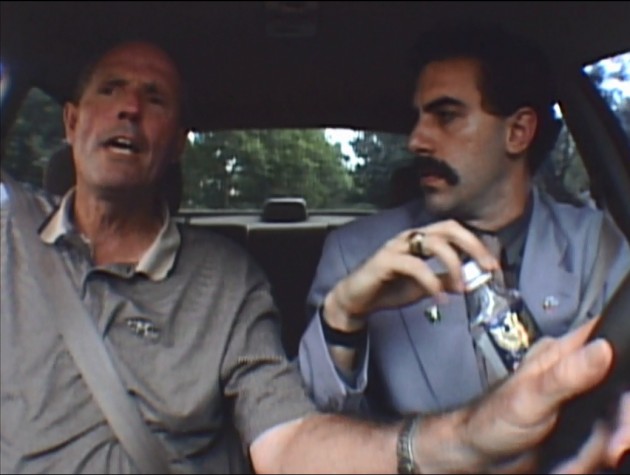 After he learns to drive, Borat goes to the Criswell Chevrolet car dealership in Gaithersburg, Maryland, where perfectly-named car salesman Jim Sell gives him a tour of the lot.

“I want a car to attract a woman with a shave down below,” Borat tells Sell while motioning towards his crotch. Without missing a beat, Sell answers, “Well that would be a Corvette. Or a Hummer.” 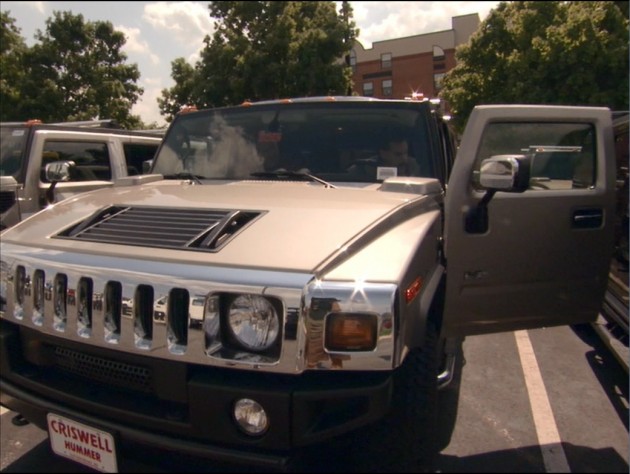 Hard to imagine why the Hummer brand is now defunct, when this baby could kill gypsies at just 35 to 40 mph

Sell shows Borat a 2003 Hummer H2, and when Borat asks how fast he would need to drive the Hummer to kill some gypsies, Sell (astonishingly) just estimates 35 to 40 mph, without questioning Borat’s motives.

Since the Hummer’s $52,000 price tag is a bit much for Borat, he instead buys an old ice cream truck, which is actually a 1983 or 1984 AM General FJ-8C Postal Van that the filmmakers converted into an ice cream truck.  Although originally designed to carry mail, the FJ-8C seems to do a good job of hauling around a black bear, until it eventually runs out of gas. 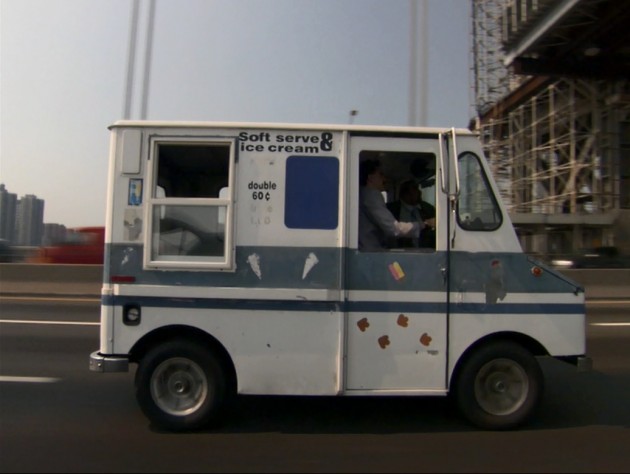 To answer the question that I posed at the beginning of this piece, the 2006 comedy hit Borat: Cultural Learnings of America for Make Benefit Glorious Nation of Kazakhstan actually holds up pretty damn well. Most of the aspects of American culture that Borat satirized are still relevant, and the incredibly awkward scenarios that Cohen devises are pretty much hilarious no matter how much time has gone by. 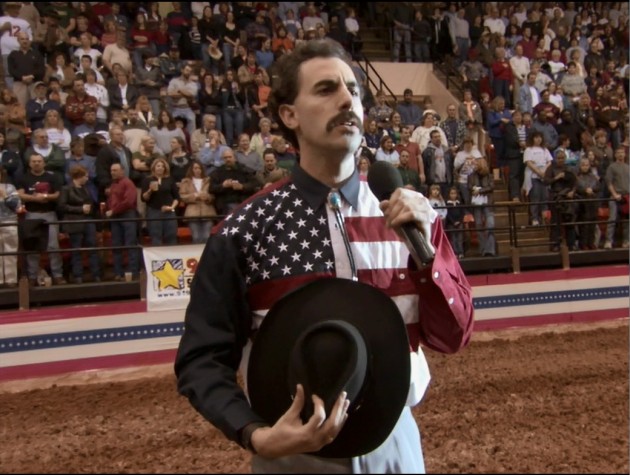 Borat, assimilating his heart out

There are times when Cohen’s antics seem a bit cruel – for example, I still feel a little bad for the owners of that Civil War antique store who had $425 worth of their merchandise destroyed by Cohen’s slapstick antics (even if they were secessionists). But in many cases, it appears that the ones who truly embarrass themselves have no one else to blame – Cohen just provides the rope, and the subjects hang themselves. Like the man at the rodeo who encourages Borat to shave his mustache so that he looks Italian rather than Muslim, or the frat bros who think America would be better if women were their slaves, or the gun store owner who calmly answers that a 9 mm or a .45 are the best weapons “for defending against a Jew.”

Borat remains a very entertaining and very effective satire of American conventions,  and it’s almost a shame that this film succeeded so wildly that Cohen had to retire the now easily recognizable character. So while we may never get a sequel, we can still enjoy the original Borat as one of the funniest (and goofiest) road trip movies ever made.