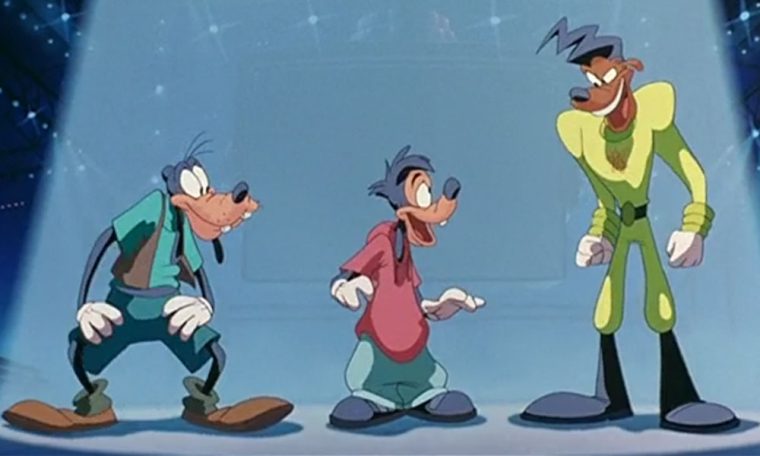 You can’t do a series on cinema’s goofiest road trip movies without including the king of goof himself, Goofy, who stars in A Goofy Movie. That would almost be sacrilege. Plus, it features the voice of Jason Marsden, whom 90s kids fell in love with on Step by Step and Boy Meets World, and Pauly Shore as Bobby Zimmeruski (yes, the leaning tower of cheeza guy).

Ah, we see we’ve caught your attention. So sit back, relax, and enjoy our A Goofy Movie review. (And please, feel free to sing along. We promise we’re not listening.)

A Goofy Movie details a struggling father-son relationship. The relationship just happens to be between two animated and upright dogs that have horribly endearing laughs. The plot begins when the angsty son, Max Goof, turns a boring school assembly (maybe… is that what it was?) into a live concert in which he imitates Powerline, a famous pop singer who also happens to be an upright dog, in order to impress a girl, Roxanne (who is also a dog, kind of). But before Max even gets to school, he belts out an awesome tune called “After Today,” in which he longs for the day after today, when he and Roxanne will be dog-mates.

Check out “After Today” and the school concert (“Stand Out”) below:

When Max’s embarrassing father, Goofy Goof, learns of the stunt he pulled at school and the trouble it could lead Max into, Goofy immediately plans a summer road trip to Lake Destiny for a father-son fishing trip modeled after the one that Goofy took with his own father. Max, however, has just landed a date with Roxanne to a party that will be showing Powerline’s new concert on TV. Unable to escape the fishing trip, Max goes to Roxanne to call off the date but instead tells her that he can’t go to the party with her because he’ll actually be at the concert, on stage with Powerline, to wave at her.

Jason Marsden, what were you thinking?

The plot then follows Goofy and Max as they disagree on pretty much everything, leading them into all kinds of shenanigans, like visiting an opossum theme park and crossing paths with Bigfoot. Oh, and this super awesome, quintessential road trip song, “On the Open Road.”

Eventually, Max is able to erase the pencil line on the map (because what the heck is a GPS?) that was leading him and his father to Lake Destiny, changing the route to the Powerline concert instead. The two continue their journey and finally start to enjoy each other’s company, but when Goofy’s friend, Pete, tips Goofy off that Max changed the map, Goofy is in disbelief. It isn’t until they come upon a junction, one leading to Lake Destiny in Idaho and one leading to the concert in L.A., that Max shows his cards and directs his father toward L.A.

Angrily, Goofy gets out of the car, and Max follows him. While they are out of the car, a loose brake causes the car to go off the side of a cliff (with Goofy and Max) and into a river. Miraculously, the car floats down the river, and Goofy and Max sit atop it, singing another great classic, “Nobody Else But You.”

Eventually, Goofy falls over a waterfall, but Max saves him with a fishing pole, using the Perfect Cast technique, which Goofy had earlier taught him.

After the incident, the two grow to respect each other (as one does after floating atop a station wagon in a river), and they miraculously make it to the concert and inadvertently end up on stage with Powerline, as Max promised Roxanne.

Check out Powerline singing “Eye to Eye” with Max and Goofy:

Although A Goofy Movie is just a cartoon, the vehicle is actually modeled after an AMC Pacer station wagon and serves as an integral part of the film. Not only does it get the Goofs from the fictional town of Spoonerville, Ohio, to L.A., but it also serves as a shelter from Big Foot, a flotation device on the river, and a stage for some of the greatest songs in animated history. (Yeah, we said it, Frozen. So what?) 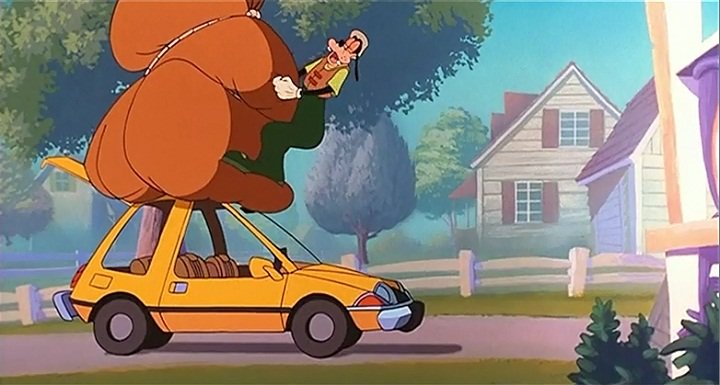 As you can see, Goofy is using proper cartoon technique to load the top of his car
Photo: Walt Disney Pictures 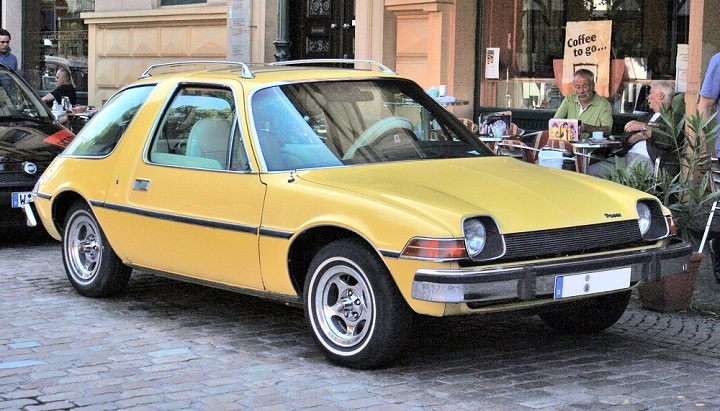 Many times, it’s cinema’s animated hits that are the dearest and most lovable classics. A Goofy Movie is no different. The characters are instantly relatable to parents and children, and are entirely endearing. Goofy, of course, is a character that has stuck around for generations upon generations, and with good reason.

The plot itself is relatable too, as parents and children who are coming of age must navigate the newfound independence of the child while also respecting the wisdom of the parent. Plus, thanks to the film, if your father ever falls over a waterfall and you have a fishing pole handy, you now know how to save him.

A Goofy Movie features funny dialogue, an instantly classic soundtrack, and a simple yet effective plot that is all too familiar to audience members. We highly recommend checking out this road trip flick if you haven’t—no matter your age!