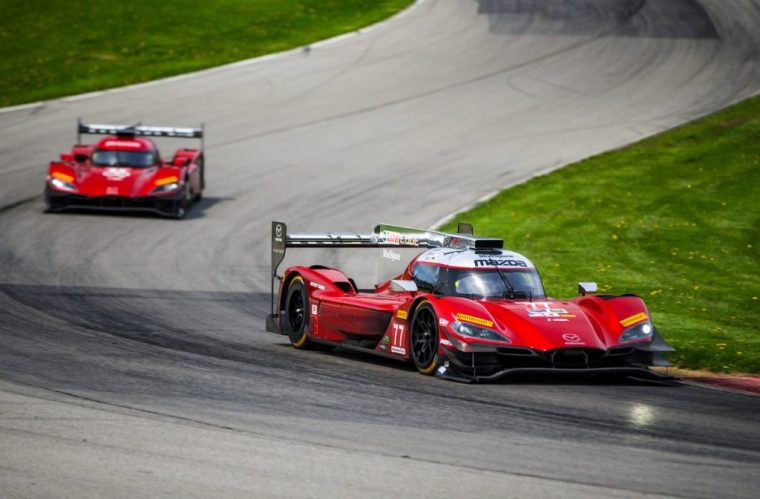 Mazda Team Joest emerged on the IMSA radar at the beginning of the year as a new race team. Now, it is already leaving its mark on the racetrack by scoring a major success in its first season.

Oliver Jarvis and Tristan Nunez drove the No. 77 Castrol/Modspace Mazda RT24-P prototype toward a historic victory on May 6th as they finished third at the IMSA Sports Car Challenge at the Mid-Ohio Sports Car Course, marking the first IMSA podium for the new Mazda Team Joest.

Teammates Jonathan Bomarito and Spencer Pigot raced in the No. 55 Mazda RT24-P and started out in the top three, but unfortunately, Pigot had to pull out of the race in the second half after receiving a hit from a GT-class car. “We showed really well,” Bomarito said. “It was just unfortunate how it ended for us… but I would rather have that happen and know that we were pushing hard rather than look back and know that we left things on the table. This was a good showing for Mazda with third place and with how competitive we were all weekend.”

Meanwhile, Jarvis started the No. 77 Mazda RT24-P off to a great lead. During the last hour of the race, Nunez drove uncontested for third place and clinched the last spot on the podium for Mazda Team Joest as he wrapped up his first start at Mid-Ohio. “It’s been a true team effort to get this podium finish, our best finish of the year,” Nunez said of their performance on Sunday. “We’ve got the best drivers in the world on our team and I’m learning so much.”

Coming up next on June 1-2 is the Detroit Grand Prix, where Mazda claimed a podium in 2017. With things off to a great start, Mazda Team Joest is eyeing a second victory and a repeat of its previous year’s performance. “The progress we’ve made so far this season is incredible and a big thanks to the team,” Jarvis said. “Now we are going to get back out there in Detroit and try to get that elusive win.”