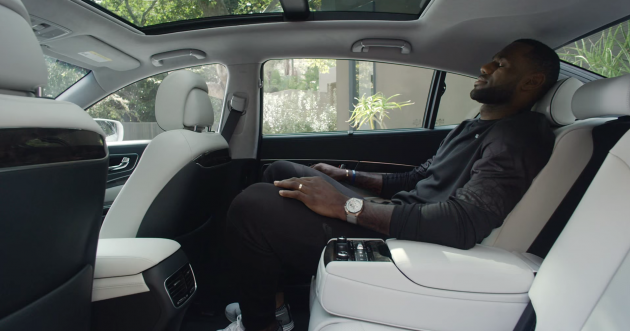 LeBron James’ Kia K900 ads don’t seem to attract the kind of attention that Matthew McConaughey’s Lincoln commercials garner—possibly because LeBron’s dialogue is much more sparse/lucid than McConaughey’s. Still, they’ve been pretty decent, even if LeBron (unlike McConaughey) has seemingly followed the old adage about remaining silent and being thought a fool rather than opening one’s mouth and removing all doubt.

So far we’ve seen LeBron pull up to the red carpet in the K900, and we’ve seen him park it cautiously in the Cleveland Cavaliers garage, but this is the first ad in which he shows off the luxury sedan’s interior.

Yeah, it seems a little strange that LeBron’s mansion wouldn’t have an interior room where he could better escape the annoyance of having good lawn care service and/or owning two smartphones. Still, having an athlete of his stature (6’ 8”) fit comfortably in the K900’s rear is a nice way of illustrating the vehicle’s spaciousness

Hard to tell if LeBron reclining in the car’s roomy backseat will convince customers to get a K900, but we know at least one person who’s already sold on the idea.