Leadfoot Ladies: Cars and Power in Hulu’s ‘The Handmaid’s Tale’

Hulu’s latest original hit series The Handmaid’s Tale takes a terrifying look into a version of the future that seems just a bit too close to home to some viewers. Based off of Margaret Atwood’s bestselling book of the same name, the show takes place in the totalitarian theocracy of Gilead that has overthrown much of what used to be the United States. Main character Offred, played by Elizabeth Moss, is a Handmaid captured and forced into a class of sexual servitude because she is a rare fertile woman and the leaders of Gilead are doing all they can to ensure the future of their society.

In Gilead, women have been sorted into three groups: The wives who run homes and live in relative comfort; Marthas, a name given to women who are domestic servants; and Handmaids, who are assigned to male heads of households when wives are infertile so that someone can bear his children. While each class of women is barred from specific things tied to their position, all of them are banned from things like owning property, reading, earning money, and driving.

That’s not to say that cars are not in The Handmaid’s Tale, as the show is populated with a wide variety of vehicles. The Eyes (Gilead’s spy service) use black vans to pick up dissidents, white-and-red vans come to take the Handmaids to births, and large SUVs and luxury cars are used by male drivers to take more important men and their wives from place to place. While wives can get into their cars and be driven anywhere they wish to go, it still says a lot about this society that even the most reliable of its women are not trusted to get behind the wheel of a car, one of the many symbols of American freedom.

Warning: Spoilers for season one, episode five below

In the fifth episode of The Handmaid’s Tale, titled “Faithful”, Ofglen (born Emily), one of the Handmaids whose abuse has been well-documented by the series, finally snaps while at an outdoor market. Her rebellion is as simple as sliding behind the wheel of a Mercedes-Benz sedan as the driver helps the wife out of the back seat. Ofglen, played by Alexis Bledel, proceeds to take a joyride around the market and the park that surrounds it. Guards use their vehicles to prevent her escape, and in a final act of defiance Ofglen kills one of the guards by running over him. Before the gruesome death, the other Handmaids seem to be excited that one of them has broken this taboo, and her friend Offred even nods to Ofglen to seemingly assure her before she accelerates over the guard. Forced to stop, the rest of the men at the market break the windows of the car and haul Ofglen into one of their SUVs.

Emily/Ofglen behind the wheel
Photo: Hulu

While Ofglen was not able to get away in the stolen car, her simple act sparked something in Offred. When Offred returns home to a lecture by the wife of her household, one of the shots of the conversation focuses on the gardening shears behind her, suggesting that Offred feels that she could also kill someone in attempt to escape her abuse. Later she remarks in her voice-over “They didn’t get everything. There was something inside her they couldn’t take away. She looked invincible.” That train of thought leads her to head to the room of Nick, the house’s driver, and sleep with him, something very illegal in Gilead. 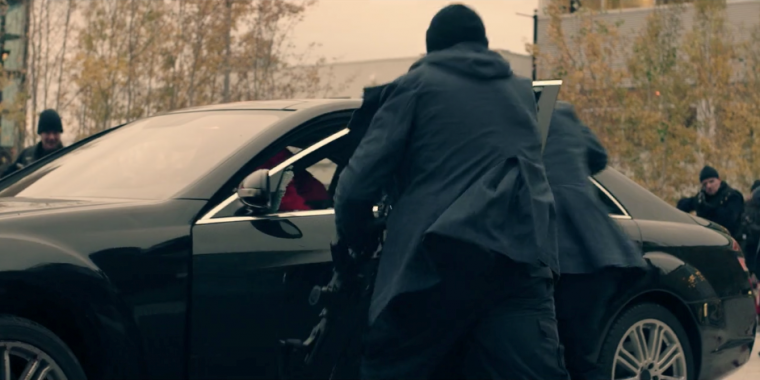 It seems is if Ofglen’s defiant reach for freedom behind the wheel of a forbidden car is going to be the event that spurs Offred into rebelling against the new world order. While Offred has fought back in the past, her resistance up until now in the present timeline has been subtle and limited to occasionally talking back. Now that she is reminded of what freedom looks like with a view of her friend in the driver’s seat of a symbol of the American dream, she wants to fight back to regain what control she has lost. I don’t think it’s a mere coincidence that the forbidden man Offred went to is the family’s driver. I suspect that in the future we could see more women in The Handmaid’s Tale either driving themselves or coercing drivers to help bring down Gilead.

The next time you get behind the wheel of a car, we hope you feel at least half the joy that Ofglen did in this episode, and remember how lucky you are to have access to a vehicle at all. Under his eye.