Man Wins MINI on The Price is Right, Gets Amped, Flops onto It

The first logical thing to do after winning a brand new car is to heave your body onto the hood. Of course you would do that. Who wouldn't?

If you grew up like me, then you no doubt spent a lot of early afternoons hooked to the tube from 11am-noon while your grandmother watched The Price is Right. Over time, casual viewing became a mild obsession, and it wasn’t long before yourself, at the ripe old age of 22, blowing off morning lectures to sit in your kitchen and watch Bob Barker meander between games with his pencil-thin microphone whilst eating Apple Jacks and shaking off the previous night’s spirits. It’s okay, you can admit it. This is a safe place. The internet is a safe place.

In any case, this makes it all the more enjoyable to see contestants on The Price is Right lose absolutely every bit of their minds when they score some big cash, win a glorious all-expenses-paid trip, or walk away with…(your best Rod Roddy voice here, please)…A BRAND NEW CAR! This morning, a contestant by the name of Scott won a trip to Belize and Ecuador, a BMW C 650 GT Maxi-Scooter, and a new car by guessing the retail price of The Showcase within $244. He took it about as well as you’d imagine. 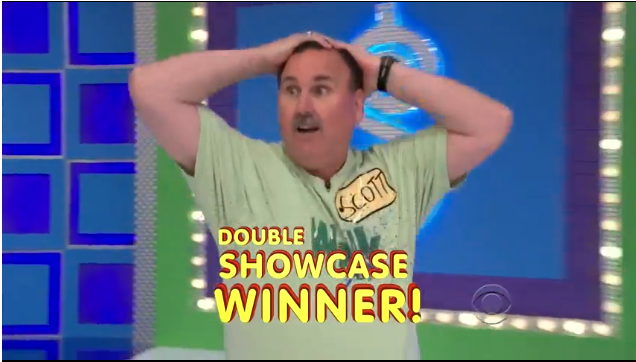 Which is to say he kind of lost his mind somewhat.

As Sean Newell of Deadspin brilliantly put it:

“Drew Carey had to take a minute to process it all before informing Scott of his feat and then Scott was gone. After a perfunctory handshake with Carey, he blew right past Carl [the other Showcase contestant] and went a little nutso. He ran around bewildered, flopped on the car, hugged the male model, and just giggled a whole lot.” 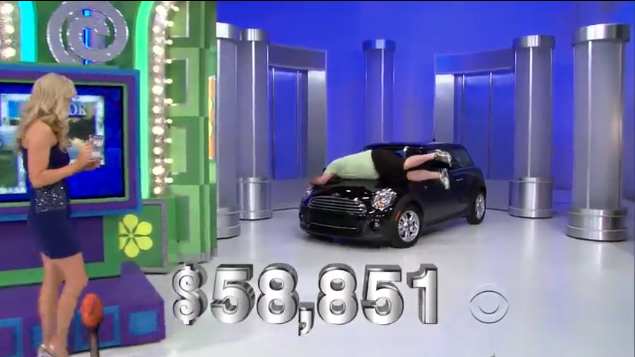 Scott, I think you’re doing it wrong. You’re sposta go in, not on.

You will never in your life see someone get that worked up over a MINI.

As if running around like a lunatic and testing his new MINI’s shock-absorption capabilities wasn’t enough, Scott found his BMW scooter and his wife, bellowed a few more victory cries, and, in Newell’s words, “also did something incredibly disconcerting with his eyebrows.” 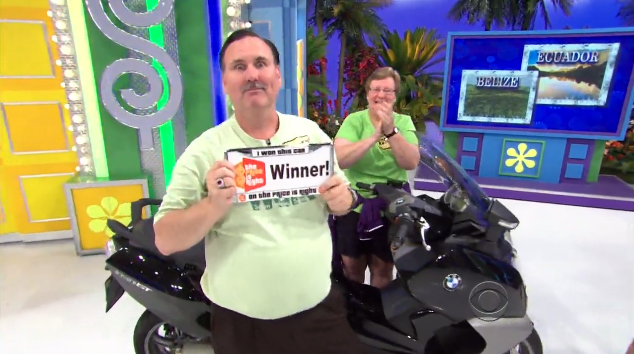 It’s also worth noting that, in my esteem, Scott looks like a slovenly and aged Ron Burgundy who decided that his fashion sense needed more “stuff-your-out-of-touch-dad-wears-on-vacation” chic.

Way to go, Scott! You’re not quite as impressive as the guy who guessed “New Baby Buggy” on Wheel of Fortune with only two letters, and you’re not the best Price is Right contestant ever (no, that would be Aaron Paul), but ya still done good.