Earlier, we (falsely) reported that Mazda was releasing an MX-5-based truck that would be marketed by Nicolas Cage (April Fools!). Now, we have some actual news from the New York Auto Show: the Japanese automaker has really and truly unveiled a new model—the 2016 MX-5 Miata Club. This reveal marks the world-debut of this performance-focused model. 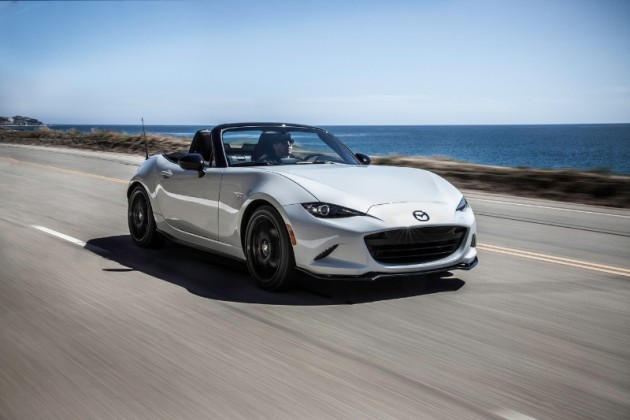 This model is designed for those who want a boost in power and performance over what the regular MX-5 offers. When equipped with SKYACTIV-MT, the MX-5 Club includes Bilstein shocks, a shock tower brace, and limited-slip differential. Additionally, the MX-5 Club has front air dam and rear-lip spoilers, 17-inch gunmetal alloy wheels, piano black side mirrors and seatback bars, a nine-speaker Bose audio system with headrest speakers, and MAZDA CONNECT infotainment.

If your performance needs are greater than what the MX-5 Club can provide, you can opt for a package that adds forged lightweight BBS 17-inch wheels, Brembo front brakes, and aerodynamic side sill extensions and rear bumper skirt (as seen on the MX-5 Accessories Concept at the Chicago Auto Show back in February).

The 2016 MX-5 Miata Club will be available later in the year, along with the new fourth-generation MX-5, and we can’t wait!