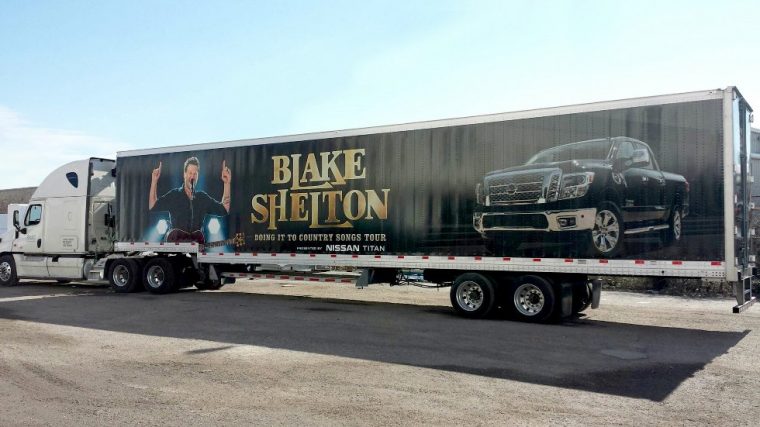 Considering that Nissan North America’s office is in Nashville, Tennessee, you would think that it would be an easy thing for the automaker to form partnerships with country music artists. However, while many of its vehicles are made in the United States, it is still considered a Japanese car company, which carries some stigma in the All-American world of country music. Happily, Nissan has formed a partnership with country crooner Blake Shelton, with the automaker sponsoring 13 of his 2017 concerts and 14 festival appearances.

You Know You Want It: Check out the Nissan Rogue One Special Editon

According to Nissan, the sponsorship is very exclusive. Not only does the Nissan Titan feature prominently on the tour semi trailers, but the Nissan logo or Titan image will appear on in-venue videos, promo items, tickets, VIP hospitality, and more. There will also be on-site vehicle displays at Mr. Shelton’s headliner concerts (not the festivals) to allow fans to get up close and personal with the vehicles themselves.

Hit the Road: Learn more about the new EV charging corridor being built

After the success of Nissan’s partnership with the Star Wars franchise, the brand is looking to create more opportunities like that throughout the year, called “big moments”. We just want to know if Shelton will omit songs that feature the brands of American trucks, like “Sure Be Cool If You Did”, from his setlist out of respect. He could also change the lyrics, so that instead of singing about meeting in the middle of a moonlit Chevy bench seat, the couple in the song will canoodle in the Nissan Titan’s new King Cab.