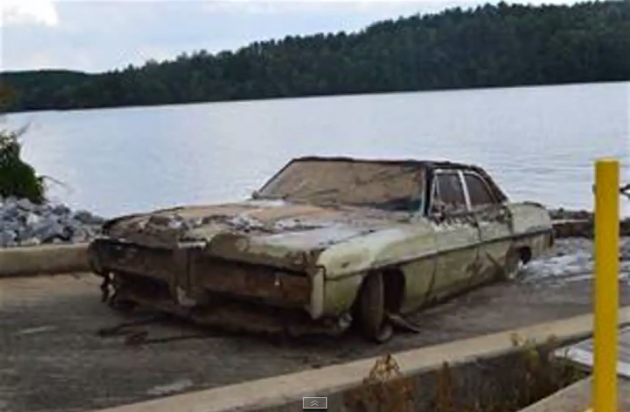 When Pamela Shook Kolbe’s father, Amos Shook, mysteriously went missing back in 1972, she swore that he would never have left them voluntarily. Now, 43 years later, she finally has some closure over her father’s departure, as his remains were recently found inside his 1968 Pontiac Catalina at the bottom of a lake near where they lived.

The Catalina was covered with rust and mud, but otherwise had been well preserved at the bottom of Lake Rhodhiss in North Carolina. The Pontiac matched the model that belonged to Shook and authorities found his wallet, ID, and human bones in the sedan’s interior.

The bones will be sent to a medical examiner for an autopsy, where they will try to use dental records or a DNA test to confirm the remains are indeed Shook’s. Police detectives said there were no signs of foul play.

Shook was a 44-year-old father, retired Air Force Sergeant, and a textile mill worker at the time of his disappearance. He was separated from the mother of his children at the time and his daughter said he went on a date the night he disappeared, but she couldn’t think of anyone that would want to do harm to her father.

Police had searched for the vehicle in the same lake back in the ’70s, by dragging the lake, but were unsuccessful. Authorities were able to locate the car this time–in more than 30 feet of water–by using a dive team and advanced sonar technology.

Detectives made the decision to search the lake again after meeting with Pamela Shook Kolbe for a project she was working on regarding her family. She said that, while she would have liked to have gotten her dad back in a different way, she was still thankful to finally have some answers.

More From GM: Everything You Could Possibly Need To Know About The 2015 Cadillac XTS