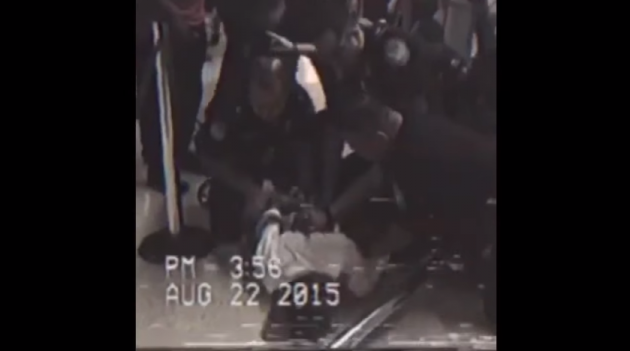 It has been a pretty good year for rapper Wiz Khalifa. Not only did he score his second No. 1 hit on the Billboard Hot 100 and get to drive some awesome muscle cars while making the song’s music video, but he was recently slammed to the ground by police at LAX for refusing to get off his hoverboard.

The incident was caught on camera, and Khalifa shared the video with his more than 20 million Twitter followers. Khalifa can be heard in the video arguing with police that he had done nothing illegal and he inferred they were only giving him a hard time because cameras were around and they wanted to capitalize on the situation to become famous.

Video: Police wrestle Khalifa to ground and place him in handcuffs

When the rapper continued with his refusal to cooperate with authorities, he was wrestled to the ground by at least three officers and he could be heard repeatedly saying, “I’m not resisting, sir.”

It is not known what brand manufactured Khalifa’s hoverboard, but Lexus is known to have produced a working hoverboard this year. The Lexus hoverboard is powered by liquid nitrogen-cooled superconductors and magnets.

Khalifa said via Twitter that he was handcuffed simply for using technology that he thinks the police will be using themselves in the near future.

We here you Wiz, but it’s still not a great idea to argue with cops at the airport.