Kia Continues to “Respect the Tech” with Kia Hotbots

Kia reboots the popular Hotbots in a new series of ads.

To advertise their new 2014 Forte, Kia is once again rolling out the stars of their popular Super Bowl ads: the super-strong female robot with a somewhat Milla Jovovich-ish hairstyle and the ability to punt those who don’t “respect the tech” back into 1984.

While the first commercials to feature the android showcasers, including the ad for the “Big Game” and the follow-up “Birds”, feature an actress in the role of the robot, the latest additions to the campaign are animated. 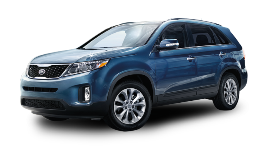 The Kia Sorento, as touted by the Kia Hotbots.

The ads—entitled “Seagulls,” “Shade Tree,” and “Outdoor Garage”—continue the patterns evident in the live-action commercials of 1) female robots displaying great feats of strength and using various sci-fi abilities in the effort of protecting and respecting the 2014 Kia and 2) overly on-the-nose naming (they’re called “hotbots.”  Seriously.  Oh, we get it!  Because the robots here look like women and are attractive!)

The imperative expressed in the campaign, “respect the tech,” has certainly been observed by consumers and critics alike.  Recently, the 2014 Kia Sorento was named to WardsAuto’s “10 Best Interiors” list, thanks in large part to Kia’s UVO voice command technology.

What do you think about the reboot of the Kia Hotbots?