Does this eye-catching biography of the late Steve McQueen do the legend justice? 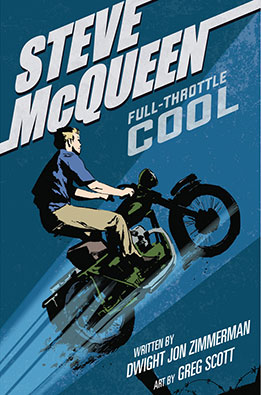 Of the numerous leading men who have passed through Hollywood over the years, Steve McQueen certainly has the most exciting life story. From his globe-trotting adolescence to his adrenaline-fueled racing obsession, McQueen’s life was never boring. While we’re still waiting for a big-screen biopic to come around, Motorbooks has released a creative, fitting way to tell McQueen’s story: a graphic novel. This black-and-white paperback book, entitled Steve McQueen: Full-Throttle Cool, recounts the thrilling story of “Hollywood’s sexiest leading man.”

Synopsis: As one could gather from the title, this graphic novel is about the life of Steve McQueen, from his childhood through his marriages, acting career, automobile racing feats, and untimely death. The novel is broken into seven short chapters that detail each stage of his life, portraying him as a fearless soul who found excitement on the race track and the big screen. It’s a simplified, glamorized depiction, but it sufficiently covers his biggest milestones. 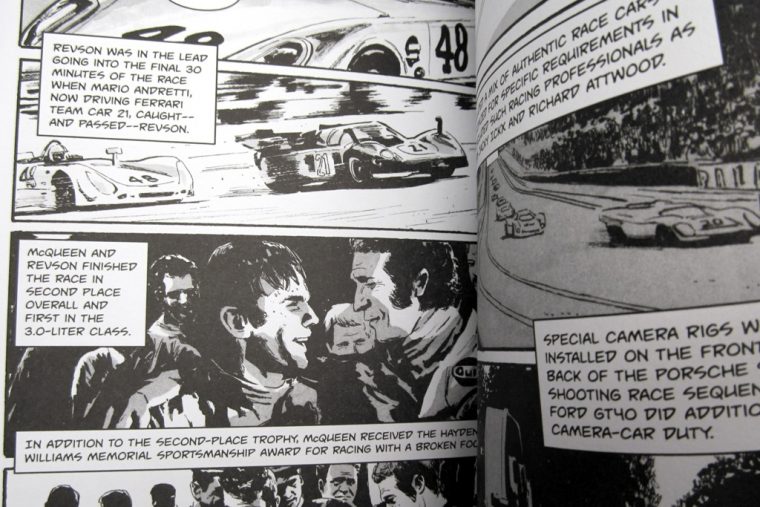 Product Quality: For a $20 suggested retail price, Steve McQueen: Full-Throttle Cool provides a product worth its cost. The binding is durable, the pages are thick and won’t tear easily, and the colorful cover will endure years of wear. Inside, the text and artwork printing is crisp and dynamic. For being a paperback, it’s definitely not cheap.

Adult Content: For being a biography of a man heavily involved in drugs, drinking, and promiscuity, Steve McQueen: Full-Throttle Cool is surprisingly family-friendly as it glosses over his questionable behaviors. Apart from a few mild vulgarities, one heavier cuss word, and brief references to his unsavory habits, the content is generally inoffensive. Due to some darker elements of his life though (such as domestic abuse), we would recommend it for readers above ten years old. 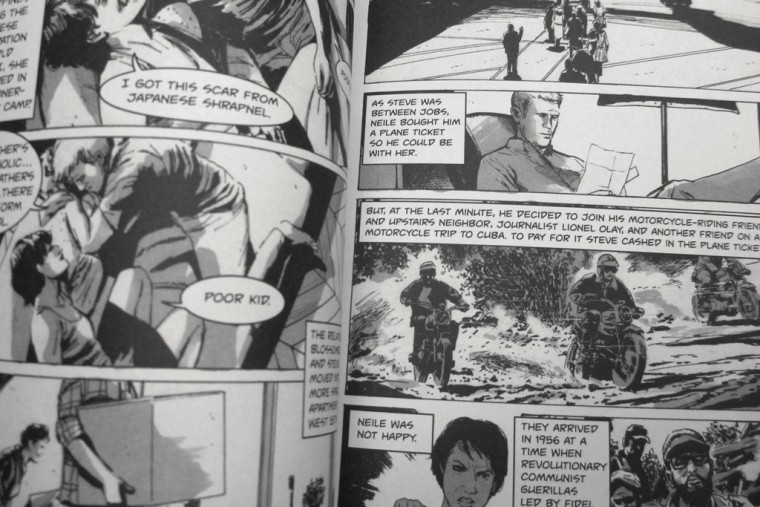 Overall Review:  Steve McQueen: Full-Throttle Cool could have been a simple, text-only biography–and no one would’ve noticed it. Its creators had a smart idea to make it a graphic novel to attract the attention of young readers who wouldn’t normally show interest in yesterday’s celebrities. Its gritty, non-cartoonish illustrations make it an appealing read for any age.

Unfortunately, as a graphic novel and a narrative, Steve McQueen: Full-Throttle Cool comes up short. The majority of the content tells rather than shows, relying heavily on constant, detailed narration. The artwork and dialogue feel like afterthoughts. While solid artistically, few illustrations really capture one’s attention or add information to the story. The same goes for the simplistic, expository dialogue that lacks depth or characterization. It reads like an illustrated essay rather than a comic book.

In the end, Steve McQueen: Full-Throttle Cool is what it intends to be: a way to spark interest in McQueen rather than provide new insight into the legend. As long as you don’t expect the novel to be a thrilling dramatization that explores the more complex, controversial aspects of McQueen’s life, Steve McQueen: Full-Throttle Cool is a pleasant introduction for beginners and appealing keepsake for fans.