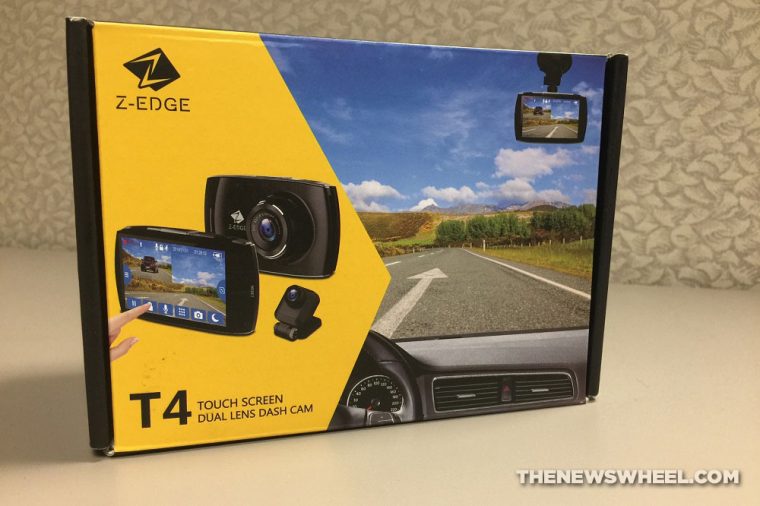 Dash cams have become an essential accessory for many drivers, providing constant surveillance of the road ahead (and sometimes behind them). Videos of dash cam footage on YouTube garner thousands of views each day, with plenty of people hoping to see unbelievable driving methods and ridiculous road rage. But for most, installing a dash cam is a way of keeping a record in case something bad happens, as some insurance companies use the footage to determine who is at fault after an accident.

Z-EDGE Technology sells a dual lens high-definition camera with a touch screen that keeps you from messing with fiddly buttons while driving. As someone who has always wanted to use a dash cam to catch the crazy antics of my fellow drivers, I tested the Z-EDGE T4 Touch Screen Dual Lens Dash Cam to see how it worked and if it’s worth its selling price.

Z-EDGE (also called Zero Edge) Technology is an American company that creates and sells automotive and home electronics. The company was founded in 2015 and its headquarters is in Atlanta, Georgia. The products created by Z-EDGE are listed on its website and split into three categories — Dash Cameras, Action Cameras, and Accessories — but are all sold on Amazon via buttons on the site. 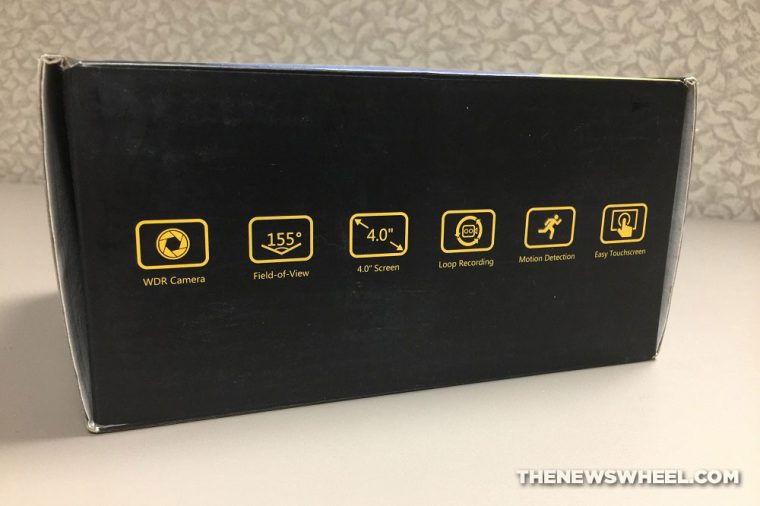 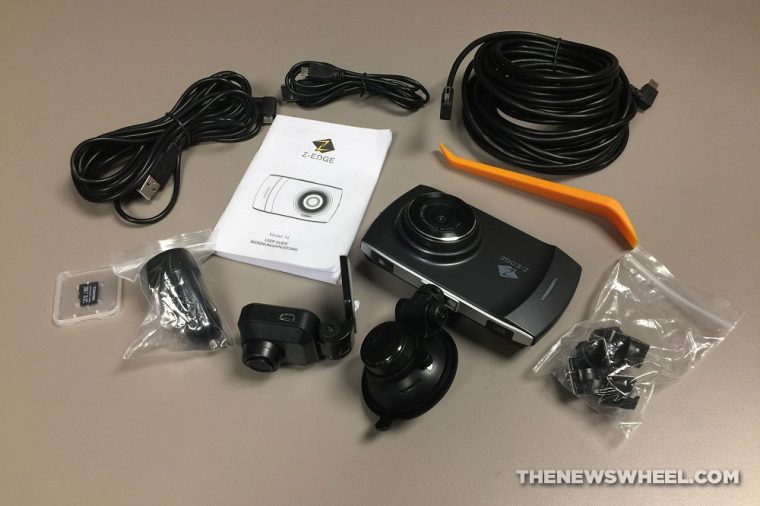 The T4 Touch Screen Dual Lens Dash Cam is described as a “best-in-class” camera that has a touch screen rather than cumbersome buttons. Some of its highlighted features include: one button photo capture, emergency video recording, video protect, audio recording, and easy installation. The overall look of the packaging was neat, clean, and very professional. However, once opened, the box contained many components, but some of them were not listed in the user guide’s “What’s in the Box” list1:

1Missing from list but in the box: Orange device (possibly for removing mounts?), adhesive mounts for cables, medium length cable for connecting camera to computer, and micro SD card. 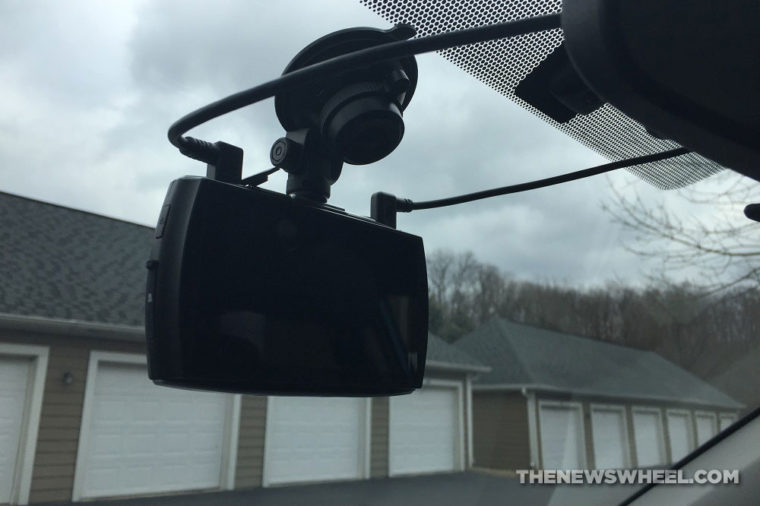 It was not possible to turn the mini USB port so the cable (left) would flow to the right
Photo: The News Wheel

With some of the components not even listed in the user guide, I was immediately wary, but I went on with installation. Attaching the camera to the front windshield was simple and the suction cup worked very well. But the instructions did not state to connect the charging cables to the camera prior to positioning it on the windshield, so I had to remove it to do this and then re-install the camera, as trying to connect the cables while it was attached to the windshield was very awkward.

The diagram for connecting the adhesive mounts for the front camera was somewhat helpful, with a dotted line suggesting where I should route the cable. However, there was no suggestion as to how many mounts I should use or where I should place them. Knowing that I had to use some of the mounts for the rear camera, I tried to divvy them up evenly. 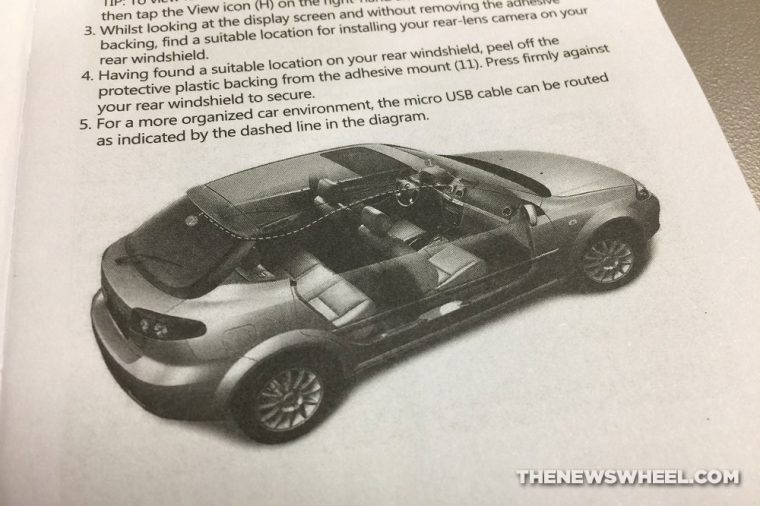 When it came to installing the rear camera, I expected to crawl between the front and back of my RAV4, but I didn’t think I would need to run an incredibly long cable throughout the entire cabin. (Are there not battery powered/pre-charging options for dash cams?) The chart for setting up the rear camera cable was just as small and moderately helpful as the front diagram, still not providing information on where to put the mounts.

I was not able to attach the rear camera to the inside of the liftgate, as it would pull the cables and potentially become unplugged. This didn’t seem like an issue, as I could just attach the camera to the roof of the vehicle instead. But because the adhesive was weak and the roof of my RAV4 is perforated cloth, the mount would not stick properly and was not completely flush with the surface. Once I had the rear camera installed, I had to deal with an excess of cable and figure out where to put it. (It ended up just hanging in the front passenger seat area, as the cable extended from the rear of the vehicle to the front to be powered.) 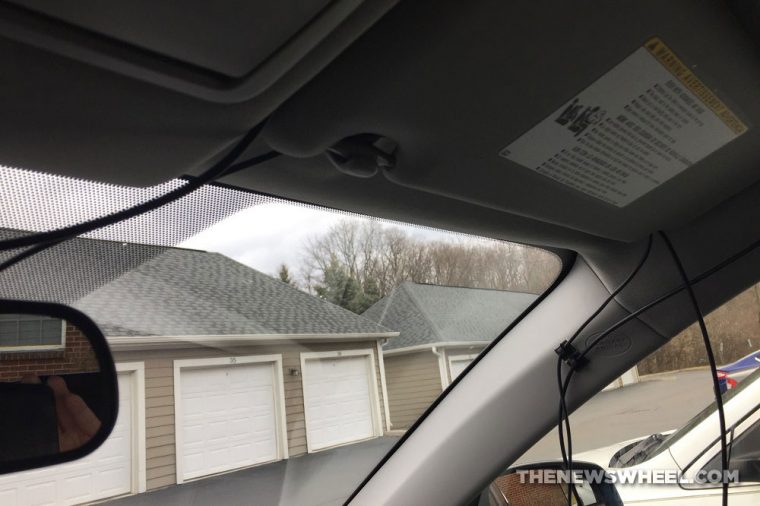 The rear cable was fed along the roof of the vehicle, down the A-pillar, and across the glove box, making a less than attractive presentation
Photo: The News Wheel 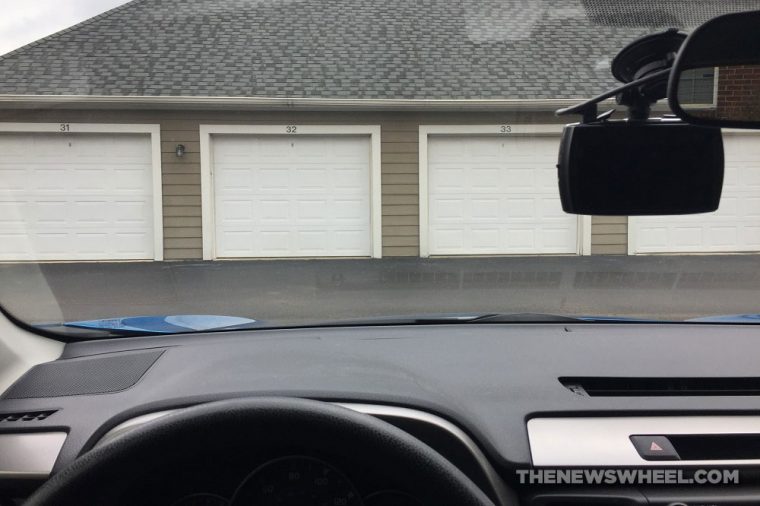 Immediately after plugging everything in via the DC power connector, the camera turned on and started recording even though I had not moved the car yet. I quickly paused the video (easy to figure out how to do) and resumed preparing for my drive. Once I was ready to drive, I started recording and was on my way. While driving, the recording screen stayed on for a few minutes and was a bit distracting. But when it finally went dark, this wasn’t an issue. When I was in a 35-mph zone, some of the adhesive mounts became unattached and caused the cable to fall, which startled me. I decided to get some footage of the highway as well during the drive.

Upon returning, I detached the camera from the cables in order to transfer the video to my computer. However, I noticed that the cables would then just hang about the cabin with nowhere to wrap them up or put them out of sight (without completely taking them down). 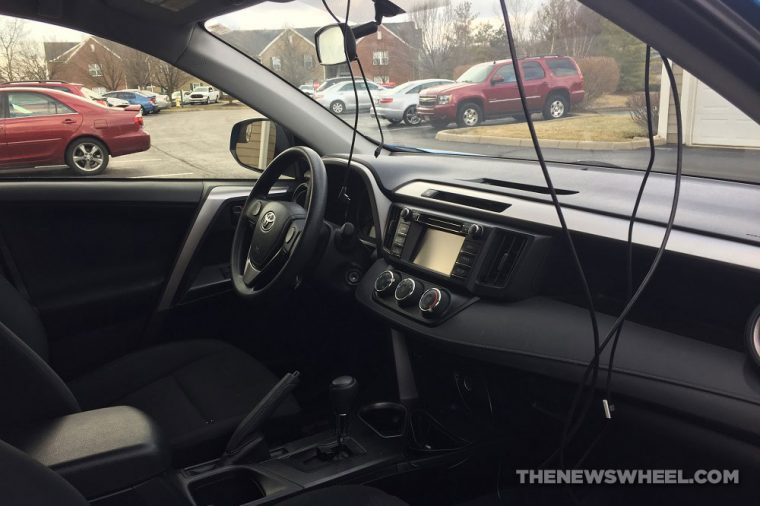 Once the camera was attached to my computer (via a USB cable that wasn’t included in the list of box components), it was simple to drag and drop the video to a folder on my computer. The quality of the video (as well as the audio) was great, providing both front and rear views, rather than picture-in-picture like other videos I’ve seen from dash cams.

After unplugging the camera from my computer, it automatically turned on and started recording. I turned it off, but the device would continue to turn on randomly and make a chime noise when doing so. Eventually, I had to remove the SD card to get it to stop automatically recording…

Finally, when I was removing the remaining components from my vehicle, the adhesive mounts that stayed up during my drive left sticky residue on parts of the interior. Perhaps this is where the unnamed orange device was supposed to be used, but because it was not mentioned in the user guide at all, I didn’t use it. 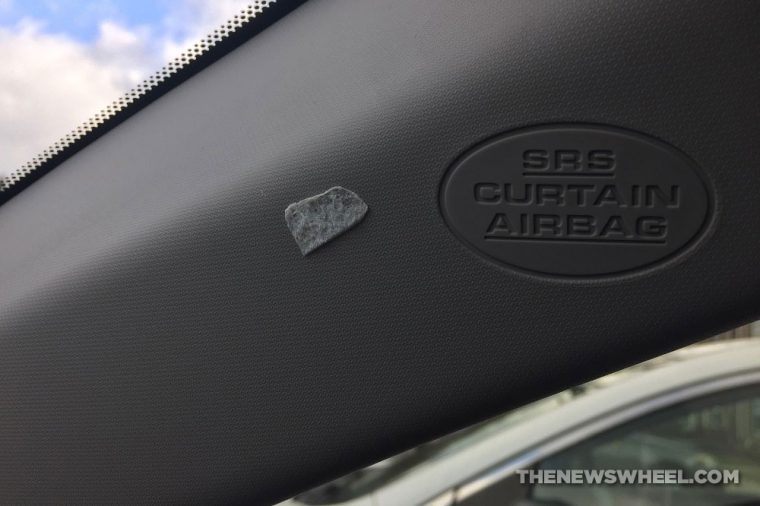 As someone who appreciates a well-maintained, clean vehicle cabin, I cannot recommend this product. The multiple, dangling, cumbersome wires alone are not worth the hassle to have the ability to capture every moment while driving. Upon further reading of the user guide (in the FAQ near the end), it is possible to go without the cables, but only after charging the camera for 2-3 hours in the car (how I had it set up).

However, if you’re fine with the cables hanging in the front passenger seat area and across the roof of your vehicle (and you’re okay with the $170 price tag), have at it!

Recommendations for the manufacturer: