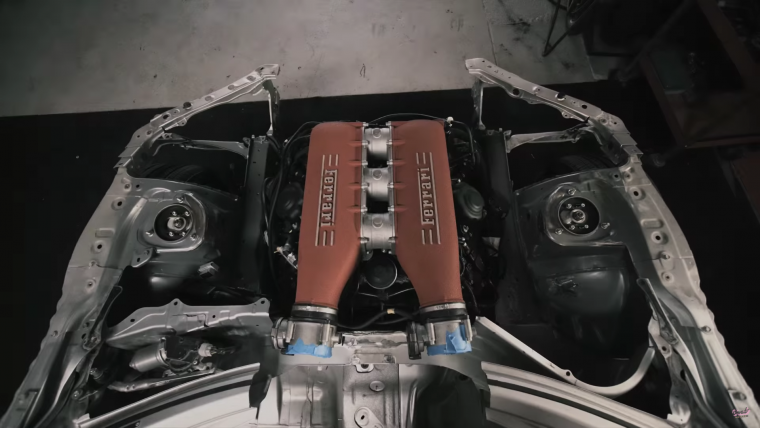 The Toyota 86/Scion FR-S/Subaru BRZ has always been one of the best affordable small sports cars on the market—but some people see the 200 horsepower figure and think it needs more. Ryan Tuerck, an American professional drifting driver, is trying to make that happen and he isn’t taking baby steps: he’s putting a Ferrari engine in it.

Not just any Ferrari engine, either: the Ferrari F136 V8, the same one that makes a stock 597 horsepower in the 458 Speciale and that was named “Best Performance Engine” and “Best Engine Above 4-liters” in the 2011 International Engine of the Year Awards.

The Toyota 86 isn’t out yet, so we’re not sure what coupe is actually being shown off in the video below—it likely started out its life as a Scion or a Subaru. In any case, the badge at the front is the least interesting thing about it: with anywhere between 200 and 300 additional horsepower, that’s one heck of an upgrade that’s sure to make controlling the rear of the two-door coupe a lot more difficult. The Ferrari 458 has all sorts of nifty electronic assists to keep the car in check in case too much power goes to the rear wheels, but the sub-$26,000 sports car has none of that. Then again, a loose rear is exactly what drivers like Ryan Tuerck really love.

In fact, it’s not the first time he’s upgraded the car. Back in December 2014, he modified a Scion FR-S to put out 600 horsepower and showed off what it could do by drifting up a Vermont mountain road. Needless to say, we look forward to seeing how this Ferrari-powered Toyota 86 will match up to it.