São Paulo to Build Greenest Highway Viaduct You Have Ever Seen

What do you do with an ugly piece of architecture? There seems to be one spot in most big cities where, through neglect or happenstance, something built for the city transforms into an eyesore. One such place is the Minhocão viaduct undersection in São Paulo, Brazil.

The viaduct was originally built back in 1971 during a period of rapid growth, but the noise and pollution from the elevated highway soon became made it apparent that this wasn’t quite all it was cracked up to be. So, in order to fix this urban eyesore, Franco-Brazilian firm Triptyque Architecture asked the community for its input, then came up with a new plan to transform the ugly viaduct underside into an attractive public space, while simultaneously reducing the pollution from cars. 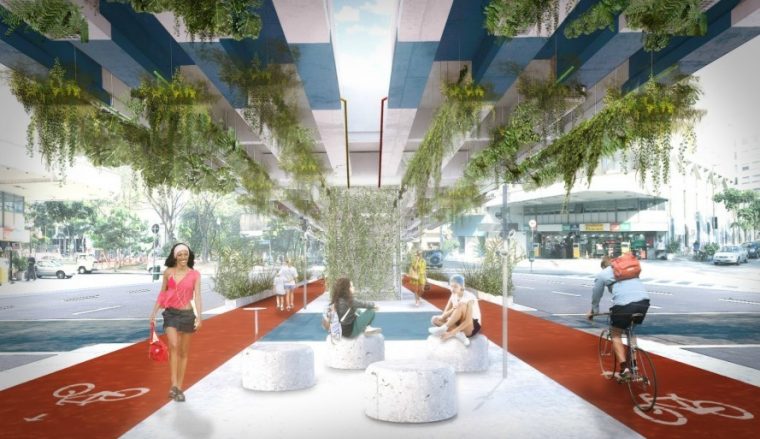 The main feature of the new space is plants. These aren’t just ferns sitting in a concrete pot by the road, though—these plants were specifically chosen because they clean the air they bring in and put out a lot of oxygen, and will be placed, hanging, from the underside of the raised highway. Using the architects’ plan, the firm estimates that the plants would reduce carbon emissions in the area by a fifth.

To help keep up this living scenery, the plan is to open the covered area as much as possible to allow in natural light, while also funneling water from a natural water harvesting system to water the plants and clean the surface areas. These will be coupled with bike paths, benches, planters, tables, and four designated blocks to house culture, food, services, and shops to make the area that was once such an eyesore into a welcoming urban environment.