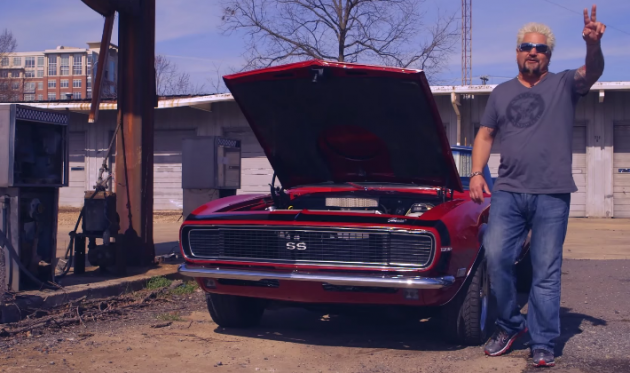 Food Network personality and former Smash Mouth singer, Guy Fieri, is an aficionado of cheap grub and a purveyor of overpriced garbage. He’s also a car guy, with a particular affinity for bowtie brand automobiles. That’s why when it came time to pick the vehicle he would drive on his television show Diners, Drive-Ins and Dives, Guy chose a classic 1968 Chevy Camaro convertible.

Fieri talks about his red-blooded American love for the vintage muscle car in a new video from Chevrolet Performance:

According to Guy, the car he chose for “Triple D” had to be a convertible—not just so that he could feel the wind in his frosted-tip hair, but so that his cameraman could fit into the passenger seat.

Just for kicks, Guy also fitted his ’68 Camaro with a monstrous, $11,000 ZZ502 crate engine, which packs a whopping 505 horsepower and 567 lb-ft of torque. Talk about “kicking it up a notch”—BAM! (Wait, is that Fieri’s catchphrase, or one of those other Food Network dudes?)

Guy says that when they’re out filming Diners, Drive-Ins and Dives, people often want to get a picture with the show’s car, rather than its host.