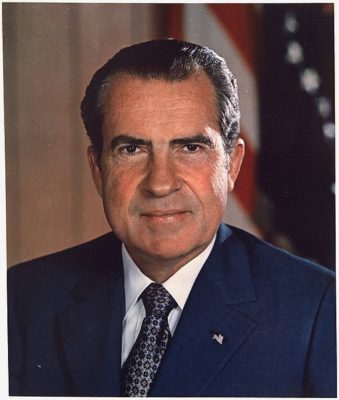 Let’s make one thing clear. Richard Nixon is not a crook! He simply had a team of crooks working for him.

Yes, poor Slick Rick Nixon’s presidency will forever be remembered for the Watergate Scandal. However, as troublesome as his domestic policies were, Nixon’s foreign policy skills were undeniably impressive. His Détente strategy helped ease relations with Russia significantly. In fact, Nixon was good buddies with Leonid Brezhnev, General Secretary of the Central Committee of the Communist Party of the Soviet Union. Titles like that are how I meet my word count for articles.

During one visit, Brezhnev took Nixon on an exhilarating road trip. When the general secretary visited Camp David, he was presented with a brand new, dark blue 1973 Lincoln Continental. Brezhnev, a car fanatic, couldn’t wait to get behind the wheel. In his ecstasy, Brezhnev grabbed the President of the United States, pulled him into the passenger seat, and gunned off down the road before Secret Service even had time to readjust their sunglasses.

Speeding down a one lane road at 50 miles per hour, the Continental soon approached a steep curve. As President Nixon probably wondered whether he would become the first president to die during a joy ride, Brezhnev applied the brakes at the last minute.

“You are an excellent driver,” Nixon told Brezhnev. “I would never have been able to make that turn at the speed at which we were traveling.”

On the inside, Nixon was probably more like this:

Nevertheless, the Camp David trip was a success at improving relations between the two world superpowers.

Tricky Dick’s political woes started long before Watergate. In fact, they started before he was even president. In 1952, Dwight D. Eisenhower was running for president. He selected Nixon as his vice presidential running mate. Not everyone in the Republican Party liked Nixon. In order to stick it to “the man” more than a decade before hippies would, they released press reports stating that Nixon had used $18,000 from a secret political fund for personal expenses.

What is a vice presidential nominee accused of political corruption to do? Use a cute dog. See, Nixon understood the power of a puppy. “Puppy Power” as Scrappy-Doo would call it.

During a candid speech, Nixon put his private life on display for the nation to see. He listed off all of his family’s modest possessions. At the end, he admitted that he did accept one gift: his family’s beloved dog, Checkers. And so, a cocker spaniel saved Richard Nixon’s political career. 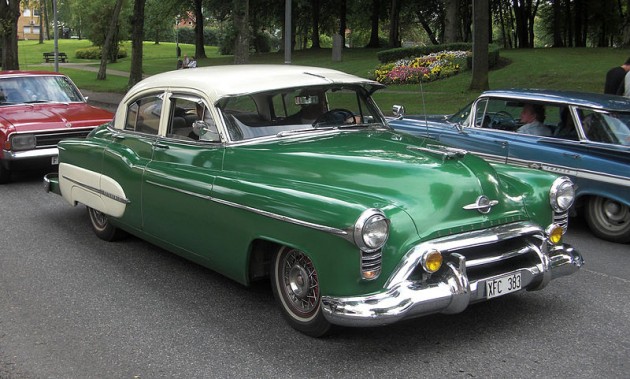 A respectable Republican car. Whatever that means.
Photo: Achird

Among the items Nixon owned was a 1950 Oldsmobile 98. This classic sedan was powered by a 5.0-liter “Rocket” V8 engine, which granted it impressive speed, a useful vehicle for those who need to outrun political allegations.

The other thing about the Oldsmobile is that it was considered a modest vehicle. By listing the car among his possessions, Nixon illustrated his humble lifestyle.

If only all of Nixon’s speeches were as successful at winning the hearts and minds of the American people as the Checkers Speech.

There we go, much better. Maybe not accurate, but it makes for a great scene to put in the trailers.

In the next installment of “The West Wing Wheels,” I discover what The Great Communicator, Ronald Reagan, used to commute. In the meantime, you can float on with President Johnson in the previous article. Or, for past presidents, check out the Independence Day Special to learn what the Rushmore Four might have driven.