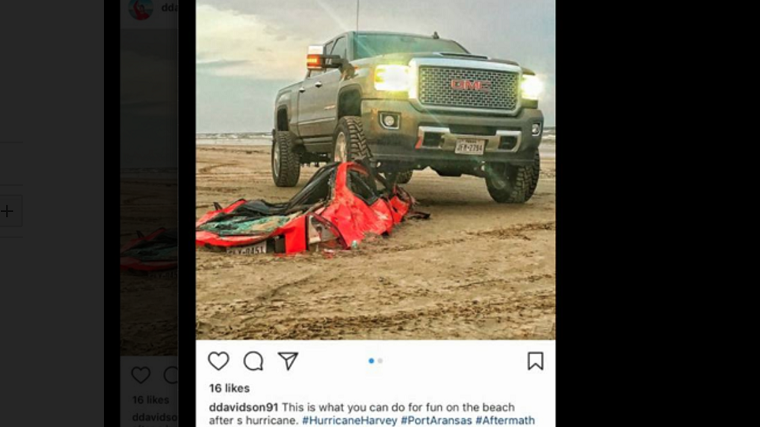 Losing your belongings to a hurricane is bad enough; getting whatever was left for you to salvage crushed by an uncaring hooligan behind the wheel of a pickup truck is even worse.

That’s what happened to Chris Burns, who was forced to abandon his new-to-him red Honda Prelude down at the beach in Port Aransas because the transmission gave out and he couldn’t afford to tow it back to his home two hours away. That was just a week before Hurricane Harvey devastated the town.

After the hurricane, Burns’ friend showed him a picture of a red Honda Prelude halfway buried in the sand with the roof completely crushed, asking him if it was his—it was, and though Burns at first believed the damage had been caused by Harvey, the truth turned out to be far more malicious.

Burns discovered a post on the Instagram account @ddavidson91 that showed a GMC Sierra parked beside his Honda. The caption read: “This is what you can do for fun on the beach after [a] hurricane.” When confronted about this by commenters, the user wrote “how about not leaving your car on the beach in a hurricane. We weren’t the first ones and weren’t the last.”

The owner of the @ddavidson91 account eventually claimed not to be the owner of the truck and merely a photographer, though that seems dubious given the aforementioned statement (not to mention having taken credit for the action in the first place).

In any case, just because someone left their car in a hurricane doesn’t give you permission to do with it as you please. It’s still their property, and even if the car was totaled by the natural disaster, some value parts may have been still salvaged.

Chris Burns doesn’t have another car to drive at the moment and has set up a GoFundMe to help him afford a new one and to potentially take legal action against the people who ran over the Honda Prelude.

Quality Salvage: Get all the Honda parts you need