This Lexus RC F Is The First Car With A Heartbeat 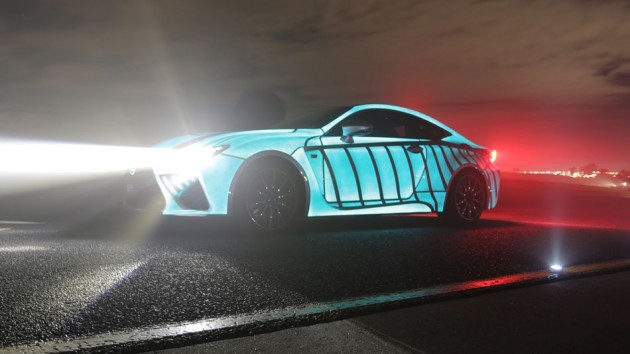 Lexus Australia has partnered with M&C Saatchi Australia’s creative tech division, called Tricky Jigsaw, to create a car that uses electroluminescent paint to show just how exciting it is to drive a Lexus. Sensors attached to the car’s driver monitor their heartbeat and then translate the data into an animation on the exterior of the car. Check out the equipped Lexus RC F below in all of its glowing glory.

Using biometric data to project onto a car is a first in the world, and Lexus hopes that it demonstrates the emotional link to driving, especially when you’re behind the wheel of a car as powerful as the Lexus RC F.

Electroluminescent paint was first applied to a car when it was added to a Ford race car in 2007. A custom Tesla Model S was also recently painted with the light-up paint. Neither company has attempted to connect it with the human body.

Ohio-based company Lumilor makes the paint, and the team at Tricky Jigsaw applied it to the vehicle. Then the electronics required to pick up biometric signals and transmit them to the painted panels on the exterior of the car were added, as well as a control box to activate the animation sequence. You can learn more about the process on Wired’s British site.

Lexus bills this car as part of “Heart Racing,” and gives a debut date as July 24th. It seems as if this will be a one-time concept car, but who knows? Imagine how much more exciting auto racing could be if you had an instant way to see how the driver was feeling. Ben Cooper of Tricky Jigsaw imagines the possibilities: “A car that can understand the driver’s biometric outputs provides all manner of possibility. Imagine mapping biometric with telemetric data to understand what stresses the driver. Could your car temper road rage or recognise tiredness? Perhaps other data such as weather and traffic could also lead us to understand optimal times to drive?”

We can’t wait to see more footage of this car in action.