Tim Allen, Who is Awful in Every Way, Got a Ford GT

Were you over here thinking that Jay Leno was the hackiest and most untalented comedian on the planet to own a super-rare Ford GT? It’s a logical enough thought process; after all, who could possibly be less funny and more insufferable than the man who built a decades-long, multi-million-dollar career out of one bulbous chin and approximately zero funny jokes?

If you are a reasonable human being, you smashed the pause button on the above video the very second you heard that unmistakable grunting noise. Or you just closed out your browser window (which means you aren’t even reading this) and uninstalled Chrome or Firefox or Edge or, god help you, Internet Explorer in the hopes of washing the taint off your hardware. Or you just turned off your computer altogether, guzzled the last half-cup of your piping hot coffee, slammed the empty mug into your screen, and immediately walked outside into the cold embrace of winter in the hopes that something on the distant horizon—even if it is the promise of a slow, agonizing death by exposure—might make you forget that Tim Allen is a thing that exists.

Yes, Tim Allen, the guy whose entire comedic oeuvre centers on reminding people that he has a Y chromosome, who marginalized the genocide of 6 million Jews by likening Hollywood to “’30s Germany,” whose real and far more apt name is Timothy Dick (more on that later), who was arrested in 1978 for trafficking cocaine and pled his way out of a life sentence, owns a 2017 Ford GT. 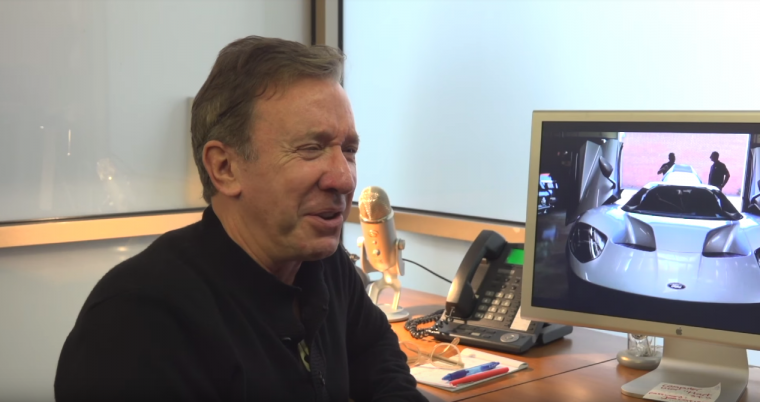 You might have last seen Tim Allen in ABC’s Last Man Standing, which was a thing that apparently existed for several years and was “enjoyed” by a fairly substantial viewership before it was, mercifully and justly, canceled. If you are a person in possession of a quality known as “taste,” you probably last saw Allen in 1999 around the time Home Improvement wrapped its final season and were only later reminded he was still around when you heard him voicing Buzz Lightyear in Toy Story 3.

Lord knows the world would not so much as blink had Allen’s career also died after Home Improvement and Galaxy Quest—if anything, there’s an argument to be made that the complete elimination of cinematic turds like Joe Somebody, Christmas with the Kranks, The Shaggy Dog, and Wild Hogs might have benefited mankind in some greater way by creating a butterfly effect chain reaction. Maybe we would have cured cancer. Maybe the current President of the United States wouldn’t be an unfathomable idiot who has to take notes to remind himself to be sympathetic to children who survived a school shooting. Maybe you’d be able to get an In-N-Out Burger east of Texas.

But, alas, Tim Allen is still working to this day, much to our collective detriment. Most recently, he signed on to feature in a docudrama entitled No Safe Spaces, which is about “how so many terrible, horrible, no good, very bad ideas have ruined college for young people and now threaten to ruin the country by creating a nation of precious snowflakes who melt when they encounter an idea that they disagree with.” Boy, that sounds like the hottest garbage imaginable! Allen’s contribution will no doubt include grunting in two or three distinct ways and making some reference to genitalia (e.g., telling millennials to “grow a pair” or something equally stupid and gross).

Because he’s so very desperate to remain relevant with a generation that he no doubt regards as being full of “snowflakes,” Allen has also started his own fledgling YouTube channel. Two months in, it’s little more than 21 bite-sized clips ranging from a Home Improvement reunion to bits from old stand-up specials from a time where people might have actually wanted to book Tim Allen. Fortunately, Allen’s comedy is the sort where you know exactly what you get based on the thumbnail. For example: 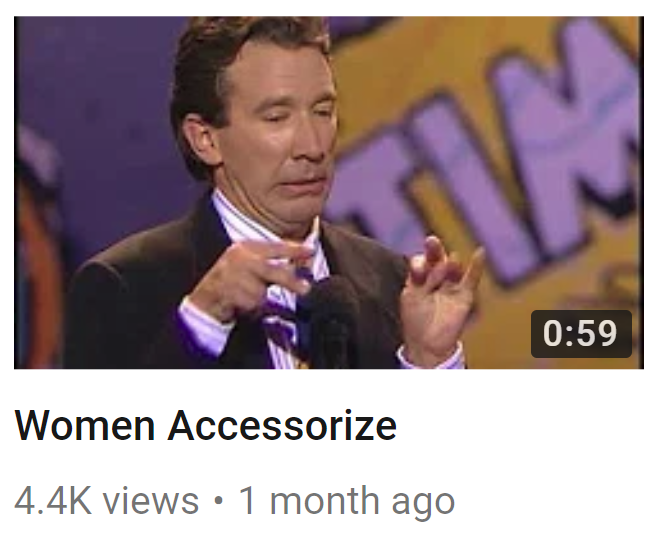 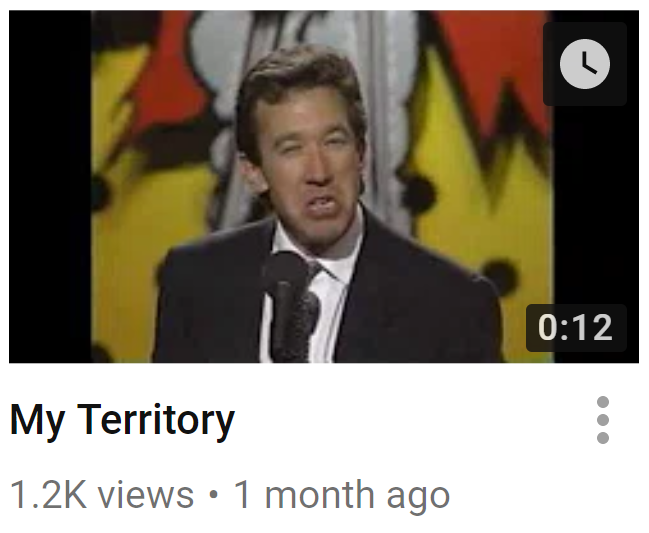 Hilarious! I can’t for the life of me imagine why ABC would have canceled this visionary’s show. Must be a VAST LIBERAL CONSPIRACY AT WORK GEORGE SOROS DOT COM.

Anyway, right, cars. One of Allen’s most recent videos is the above “Meet GT,” in which he…drives around in an Ingot Silver Ford GT. Look, I’m going to level with you. I played this thing once and only once, mostly dragging the scrubber around to determine if there was anything more unique than low-production-value footage of someone’s tragically hip uncle driving around in a car. 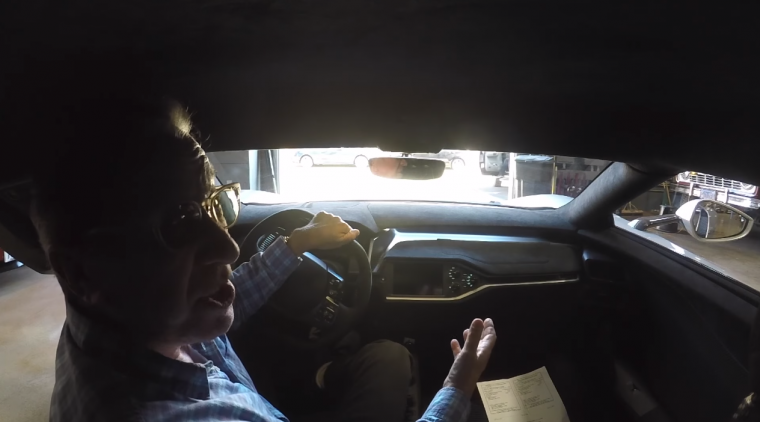 “Aw, durnit, I forgot to get the Metamucil”

The most compelling parts of the video are the stuff at the beginning of the GT being delivered in a trailer, the walkaround proper once it makes its way into what one could presume to be Tim Allen’s garage, and the exterior running footage of it being driven around. Basically, the best stuff in this video from Tim Allen is the stuff where Tim Allen is nowhere near the screen. Whodathunk.

It’s actually pretty astonishing that Ford would sue John Cena for selling his Ford GT too soon but not go after Tim Allen for not immediately selling his to someone less horrendous. Which is doing more damage to the brand, I ask you.

Oh, you wanted to know about Tim Allen’s insight into the experience of driving a Ford GT? Couldn’t tell you. I should have mentioned that the video was also played in the most palatable manner possible: on mute and while listening to something else (Flatbush Zombies’ “Headstone,” in case you were wondering). I preferred this method because I assume that listening to Tim Allen speak for anything more than like 30 seconds at any one time is enough to deliver you screaming into the hands of madness—think taking in a matinee of The King in Yellow, except instead of being left unable to forget the black stars hanging high over Carcosa or the visage of a Pallid Mask, you cannot shake the sound of a talent-bereft actor and comedian grunting and making dick jokes.

Don’t believe that last part? Then you haven’t read any of the pearls of wisdom in his book, Don’t Stand Too Close to a Naked Man. I received a copy as a gag gift recently (because, as you can tell, I’m a huge fan of Tim Allen), and among its many pages I found some real gems, including an entire chapter—“My Name Made Me Do It”—devoted to making jokes about his given last name (BECAUSE IT’S A SYNONYM FOR MALE GENITALIA YOU SEE ARE YOU SEEING THE COMEDY HERE YET).

But, wait! There’s so much more! Did you know that Tim Allen, noted man, has thoughts on sex and women? Oh, boy, does he ever. Strap in and get ready for the funny:

I mean, you get the idea, right?

I think we can all agree that it is very nice and good that Tim Allen got to buy a car that costs upwards of $463,376.50—presumably with the money he made from playing Buzz Lightyear and not from his former career of smuggling coke like a mustachioed pack mule. I think we can also mostly agree that we would all be best served if Tim Allen got in that shiny new Ford GT of his and drove right out of the American consciousness forever at speeds of no less than 214 miles per hour.