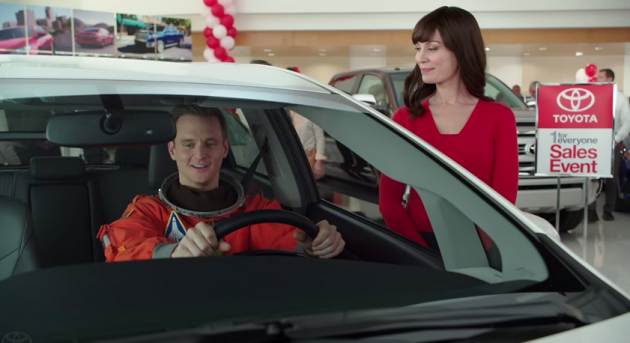 “You bet your asteroid!”

Here at The News Wheel, we’re pretty big fans of Toyota Jan, so we have been pretty happy lately to see a couple of new commercials starring the woman herself on our screens during prime time. In total, two new Jan commercials are making the rounds, and they’re full of the puns and jokes we’ve come to expect from Jan (who, an on unrelated note, now sports some rather fetching bangs). [ Watch the commercials Here and Here ]

The first commercial is titled “Career Day,” and features Jan running around her dealership, sliding across car hoods, and generally being a sales superwoman. As the scene ends, it shows Jan at an elementary school, saying, “And that’s my typical day!” The two parents to follow include an astronaut and a fireman, neither of whom want to follow Jan’s enthusiastic presentation. But the best part of the commercial by far is the closing scene, when the astronaut is at Jan’s dealership, sitting behind the wheel of a new Toyota, and says, “This is outta this world!” Jan’s reply? “You bet your asteroid!” Ah, Jan.

The second commercial, “Baja 1000,” features a man who is interested in a Tundra truck, one of which recently won the Baja 1000 desert endurance race. The man is interested in the Tundra for its excellent off-roading skills, which will allow him to go camping, fishing, and generally enjoy the great outdoors. The customer admits that he has always wanted to go to the Baja 1000 race, to which Jan replies, “I once got a taste of it.” Cut to a scene where she’s watching the race and a truck drives past, throwing up dust which goes into Jan’s mouth… so, literally, a taste of the race. Geddit?

Can’t get enough of Jan? Check out some of her previous Toyota commercials, or watch her in her new YouTube series on parenthood, The BreakWomb.