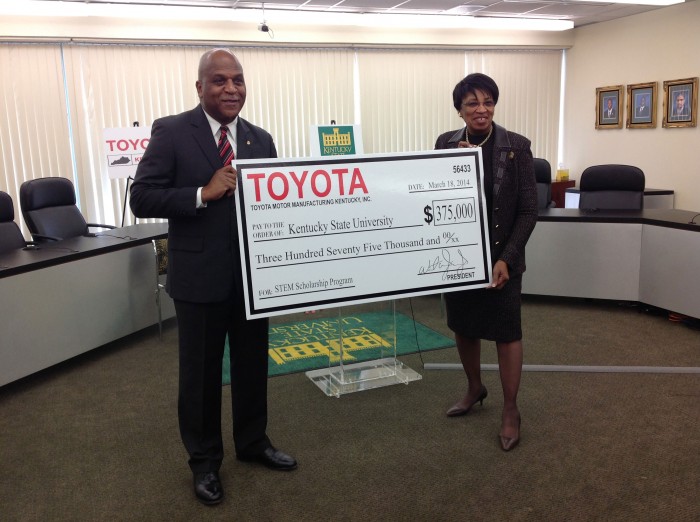 Toyota has announced its partnership with Kentucky State University, one which involves a scholarship program that will help mechanical-engineering students attending the university and, Toyota hopes, persuade them to ultimately bring their talents to their headquarters someday.

The Toyota Engineering Scholarship program will be created after the automaker served up a five-year $375,000 grant to KSU, and Toyota will be granted greater access to rising mechanical engineers who will no doubt be hungering for their big breaks once they earn their degrees.

“The auto industry in general has a shortage of talented engineers coming out of college,” said Wil James, president, Toyota Motor Manufacturing, Kentucky, Inc, in a press release. “Young engineers need to understand that our Georgetown plant, with its robotics, and cutting-edge technology, is the wave of the future.”

According to program details KSU will supply Toyota with five incoming freshmen who excel in the STEM (Science, Technology, Engineering, and Mathematics) disciplines. Those students will all receive full-ride scholarships that cover three years at K State on a pre-engineering curriculum and their final two years at the University of Kentucky. Once the fifth year has concluded, they will walk away with an undergrad degree from Kentucky State, an engineering degree from UK, and—possibly—a post-collegiate job with Toyota.

During the Toyota Engineering Scholarship program, students will be mentored by Toyota employees and introduced to co-op employment/internship opportunities while they chase their certificates.

“Toyota and KSU both know that producing knowledgeable and skilled graduates means a more capable workforce, a richer economy and a stronger nation,” said Mary Evans Sias, Ph.D., president of Kentucky State University. “We appreciate Toyota’s continued support through the Toyota Engineering Scholarship program, and we expect more great things to come as a result of our work together.”

Accolades for Scion: The Scion FR-S Named an Automobile Magazine All-Star Once Again