Is this the hoverboard all that  Back to the Future fans have been dreaming of?

The Lexus Hoverboard was announced in June, exciting Back to the Future fans around the world, and we’re finally seeing it in action. Watch it take on a skate park, which includes a water obstacle and a jump over a Lexus vehicle, in this latest video from the automaker:

We have to admit, it looks pretty sweet in this video. The hoverboard performs the jump over a Lexus pretty well and completes many tight turns and more complicated motions. It even glides over a pool of water, an obvious reference to Marty McFly’s attempted escape in Back to the Future. 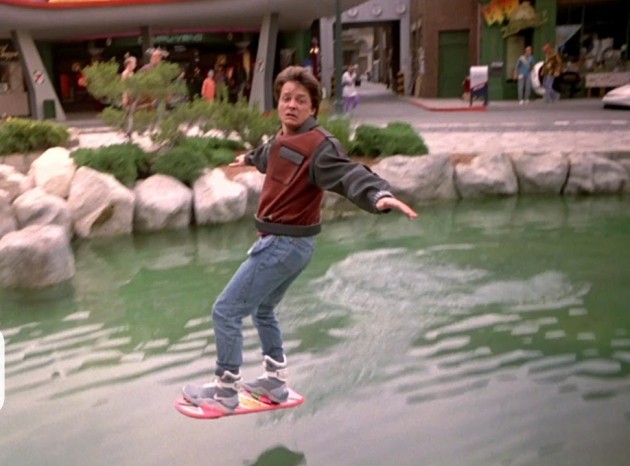 As we mentioned when the Lexus hoverboard was revealed, it uses the same superconductor technology as Japan’s bullet trains. The steam visible in the videos is from liquid nitrogen cooling down the superconductor in the sun. It looks pretty sweet, but there is a lot going on behind the scenes.

Previous hoverboards have all had to hover over a metal surface. And while it looks like the Lexus hoverboard is doing just fine over concrete, Dan Read of TopGear was invited by Lexus to see and ride the hoverboard, and he reports that it’s running along a metal track already placed in the skate park. If you were to give it a gentle push to start it off, the hoverboard would travel along the track and obstacles without a rider.

That revelation certainly takes a lot of the fun out of it.

There is a lot of falling involved with the Lexus Hoverboard

The hoverboard is also pretty unstable. You can see someone fall off of it at the beginning of the video, and TopGear reports that the track it’s on is only a centimeter wide. Per Dan Read: “So rather than adopting the posture of a surfer, you should actually imagine that you’re walking on a tightrope, with your toes pointing along the board.” That certainly doesn’t sound like something that Marty McFly could just jump on and take off with. When the hoverboard jumps the car, it actually requires a lot of physical effort to push the hoverboard off of the edge, and then the rider has to attempt to land on the thin track on the other side.

The Lexus hoverboard jumps a car… and then stops.

The Lexus hoverboard is still a really cool project, but it’s not quite as versatile as we imagined it. Maybe someday someone will give us the real hoverboard we were promised in the Back to the Future films. But will it be in time for the 2015 deadline?

Will anyone ever get it right?!
Photo: ©Amblin Entertainment