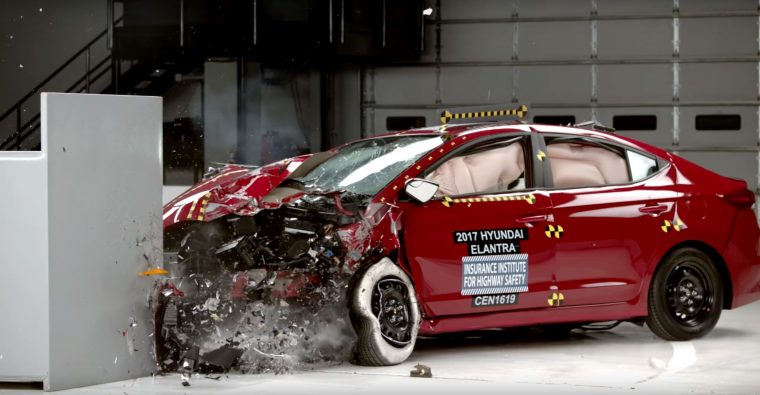 For the 2017 model year, the popular Hyundai Elantra underwent a drastic redesign, recently earning a International Design Excellence award. But a new exterior look for this compact sedan isn’t the only update it received; improvements have been made inside, too.

The Insurance Institute for Highway Safety (IIHS) has revealed the results of the 2017 Hyundai Elantra‘s crash test, including footage of the small overlap test. While previous Elantra models did not earn a full rating from the IIHS, the newest generation improved its small overlap test results to earn a superior overall designation of Top Safety Pick+.

To earn a Top Safety Pick+ title, a model has to earn “Good” status–the highest designation–in multiple categories: small overlap front, moderate overlap front, side, roof strength, and head restraints/seats. The 2017 Hyundai Elantra earned top status for all of these categories, in addition to earning a “Superior” status for its front crash test prevention.

The difference between previous years’ and this year’s models is the front intrusion depth, decreasing from nine inches to two inches. This results from the junction between the door sill and hinge pillar being reinforced.  Overall, the IIHS reports that “measures taken from the dummy indicate a low risk of any significant injuries in a crash of this severity.”

The full report can be found on IIHS’s website.