What Are the Different Types of Traffic Cones?

The different names and designs of safety cones, and how they're used

Every time you drive on the highway, it seems you pass through a construction zone filled with orange markers telling you where to go. Traffic cones permeate our streets, but we as average motorists rarely give them much thought. These useful markers create visual and spatial barriers along roads in dangerous areas.

Also known as traffic pylons, road cones, highway cones, safety cones, construction cones, and any regional nicknames, these traffic cones come in all shapes and sizes. While orange is the typical color used on American roadways (with neon yellow sometimes being seen), some areas of Europe have begun using different colored cones to identify certain hazards.

But what do the different types mean and what are they used for?

Learn About How Traffic Safety Cones Are Used

Traditionally, there are three types of portable traffic control markers based on their shape: drums (aka barrels), cones, and tubes. Tubes can also be differentiated based on the shape of their top: traditional (flat/round hole), grabber (a knob to pick up by), and looper (a ring through which rope can be strung). 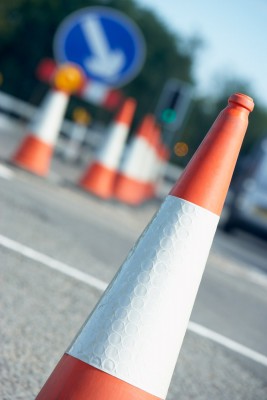 Drum: The most common safety indicator used on freeways is shaped like a barrel and stands about three feet tall. They’re heavy, durable, and can be seen from far away, so they’re ideal for use around high-speed traffic areas. They can be mounted with extra reflectors.

Cone: Synonymous with indication caution areas, traffic cones come in all shapes, sizes, and colors but aren’t used very frequently these days. You’ll typically find them in parking lots or on the sides of roads where cars are temporarily parked. They’re usually carried and used by everyday motorists in emergency/immediate situations.

Marker: These tall, thin cones–alternating colored and white sections that look like a hybrid between a tube and cone–are often seen in zones where pedestrians and traffic are next to each other. For instance, these are ideal for use in public street festivals to show what areas of the street are being closed off for pedestrians, as these tubes often have loops where rope can be added to create a path.

Channelizer: These tubes are used to guide drivers at low speeds through/around areas of work zone activities. They have wide, heavy bases and two-or-three reflector rings (called collars) at the top.

Delineator: These posts resemble channelizers but are used in more long-term, local environments, such as roundabouts and merges. They have smaller bases but can be adhered to the ground for long-term use.

However, when it comes down to it, many road workers and flaggers pick their cones based on functional details such as visibility, weight, ease of deployment, storage space, duration/location of work, and more.

Who knew there were so many different types of safety cones. And that’s not even considering all the other fencing and barrier methods, too.