When it comes to the world of celebrity car collections, some stars–like retired boxer Floyd Mayweather Jr.–prefer expensive and exotic rides, while other stars–such as Hollywood actor Dwayne Johnson–are content to ride in a Ford F-150 pickup truck, albeit with a handful of custom modifications. However, for those few bold celebrities who are really trying to stand out on the road, few things can do the job better than a bright pink paint job. Below are five of the most notable celebrities who are brave enough to drive dazzling pink cars…

Does Kylie Drive Pink? Check out the 5 most exotic cars from Kylie Jenner’s car collection 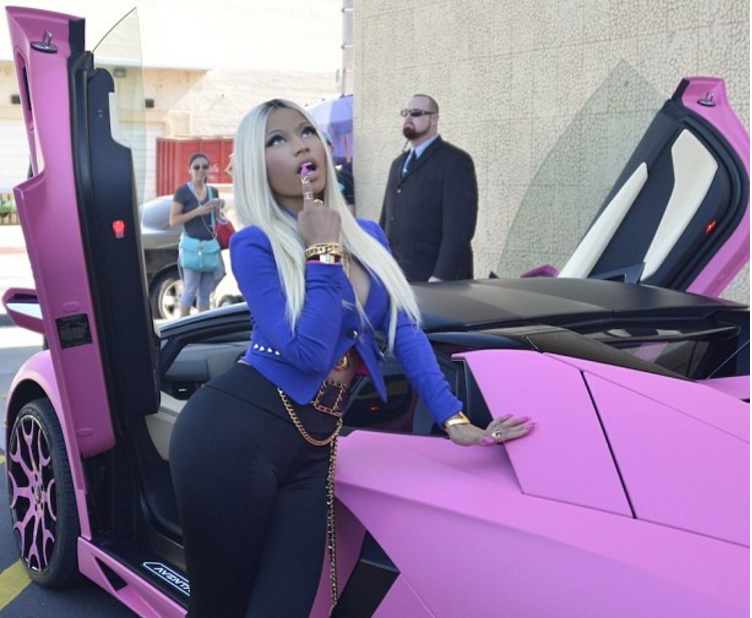 It’s no secret that rap star Nicki Minaj has a fascination with the color pink. She named her first studio album Pink Friday and her most recent CD was titled The Pinkprint. With that information in mind, does it surprise anybody that she modified her Lamborghini Aventador Roadster with a custom pink wrap? This custom work set the rapper back at least $30,000 and that’s on top of the nearly $450,000 she paid for the car in the first place. Furthermore, this car actually caught the attention of the automotive community so much that it made a cameo appearance at the 2013 SEMA Show. 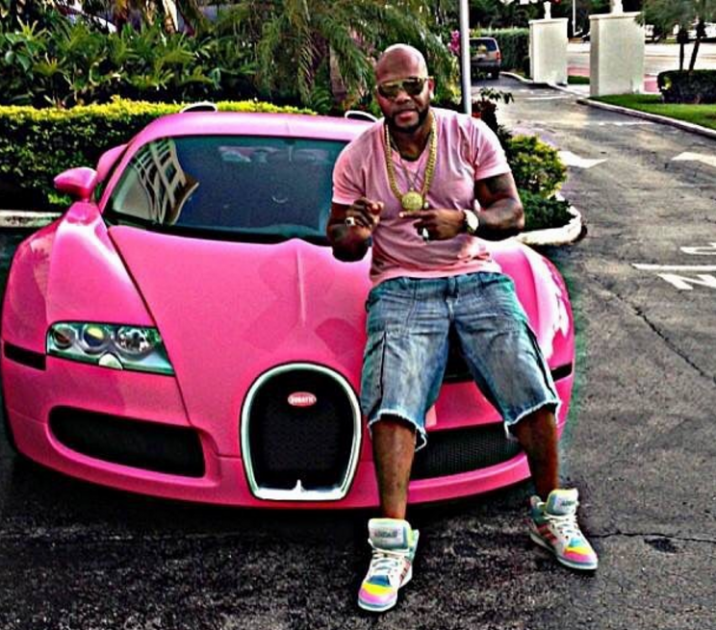 It takes a real man to drive a pink supercar
Photo: © Intagram

In October 2013, rapper Flo Rida gave his Bugatti Veyron a pink wrap in order to bring attention to Breast Cancer Awareness Month. He even went as far as to get a pink ribbon painted on the hood to make his point even clearer. What’s more, the fact that he performed these modifications on his Bugatti Veyron is even more surprising when you consider that car’s MSRP far exceeds $1 million. That means he choose what’s likely one of the most expensive cars in his collection to make his bold statement. However, he can probably afford to buy at least a few more supercars, thanks to hit songs such as “My House,” Right Round,” and “Low.” 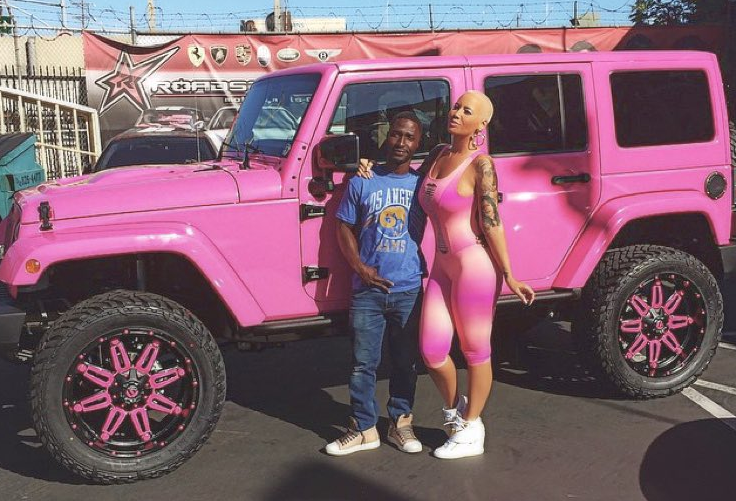 This picture shows Rose’s pink Jeep before it was given a chrome wrap
Photo: © Intagram

The Jeep Wrangler Unlimited is one of the most hardcore off-road vehicles that money can buy thanks to its solid front and rear axles, rugged four-wheel drive system, and capable V6 engine, but celebrity model Amber Rose took a different approach with her Jeep, giving it a bubble gum pink wrap and matching rims. This vehicle has since been given a new pink Chrome wrap, which was done by Roadstarr Motorsports in Los Angeles. If you’re trying to figure out why Rose is so famous, the simple answer is she is the ex-wife of rap star Wiz Khalifa and she also appeared on the 23rd season of Dancing with the Stars. She finished 9th overall. 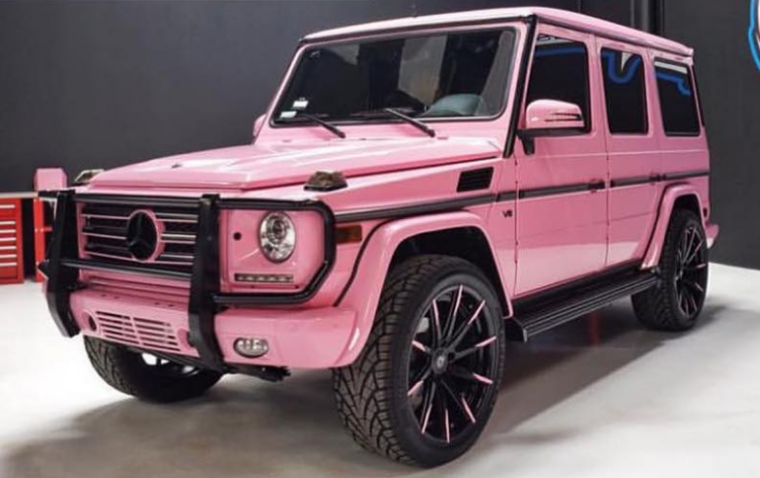 West Coast Customs is responsible for much of the unique work on this Mercedes
Photo: © Intagram

The Mercedes-Benz G-Class SUV is one of the most popular vehicles for celebrities who reside in Los Angeles, California. Everybody from reality TV star Kylie Jenner to rap star T.I. owns one these extravagant SUVs, so you just knew that YouTube personality Trisha Paytas had to get one. However, her G-Wagen features an eye-catching custom pink paint job and numerous Swarovski crystals throughout the interior. In addition, the Mercedes-Benz G 550 is powered by a 4.0-liter biturbo V8 engine rated at 416 horsepower and 450 lb-ft of torque. This powerful motor allows the G 550 to accelerate from 0 to 60 mph in less than six seconds. 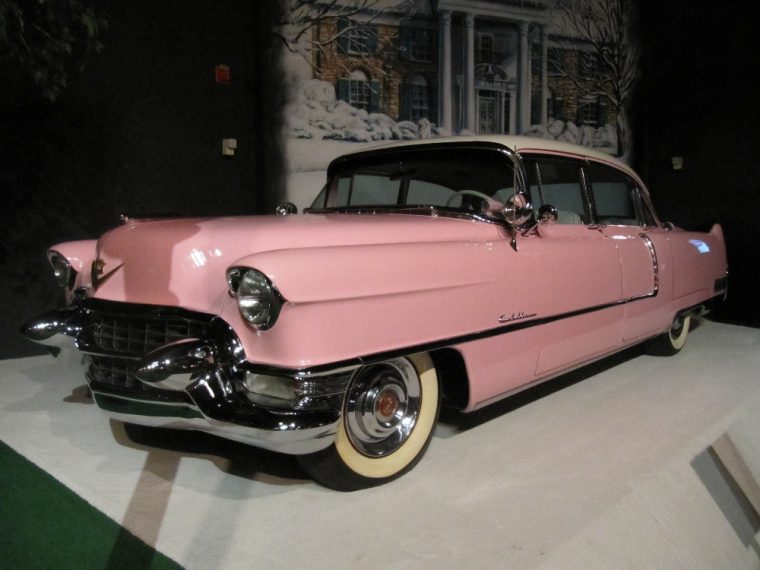 Elvis used this Cadillac for tours and he eventually gave it to his mother, Gladys
Photo: © Mr. Littlehand

Elvis Presley’s 1955 pink Cadillac Fleetwood 60 is arguably the most famous car in the world. He bought the car to replace another pink Cadillac he purchased a year earlier, which unfortunately was destroyed in a fire. Elvis and his band used the pink Cadillac Fleetwood 60 for touring before the musician eventually gave the car to his mother, Gladys. Following his death in 1977, the pink Cadillac was put on display in the auto museum at Graceland. It stayed there for more than 30 years, before it was eventually shipped to London in 2015 so it could be displayed at the Elvis At The 02 Exhibition.

Celebrity car Collections: Check out the 10 craziest celebrity cars from 2016