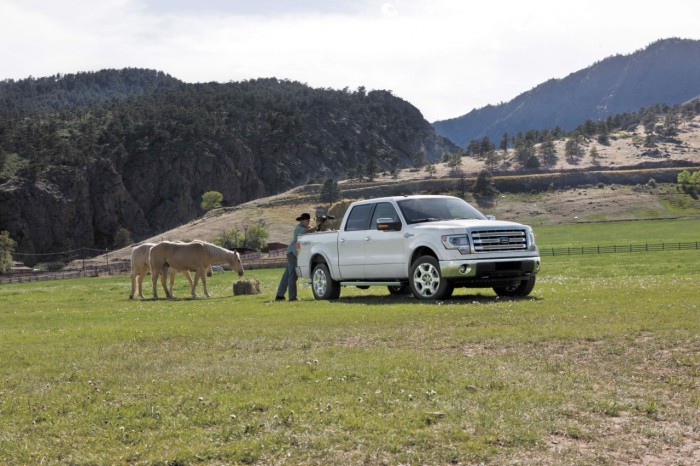 The 2013 Ford F-150 preserves the brand’s traditional, utilitarian boxy exterior but adds several ornaments to make the popular truck not only useful but cool. The new grille, bumpers, and mirrors contribute to a front-end suggestive of the truck’s powerful capabilities. The tall bed wall makes for a deeper, roomier box than on most trucks, though it can be hindrance when trying to access gear in the center (however, Ford has added an extendable side step to combat that issue).

For ultimate towing capability, nothing beats the 6.2-liter V8’s 11,300-pound tow rating, though the available 3.5-liter twin-turbocharged EcoBoost V6 engine will likely offer the perfect compromise between power and efficiency that most buyers seek.

As with power, the 2013 Ford F-150’s efficiency depends on your choice of engine. The most efficient is the EcoBoost V6, which returns 16 mpg city/22 mpg highway despite coming only second to the big 6.2-liter V8 in terms of power. That one is rated at 13 mpg city/18 mpg highway. The most economical of the four engines is the standard 3.7-liter V6 which delivers 17 mpg city/23 mpg highway.

The interior of the 2013 Ford F-150 has been designed with active owners in mind. Knobs, switches, and buttons are all slightly oversized and spaced, making for easy access and control even while wearing gloves or simply having numb fingers. The backseat is comfortable and roomy with abundant legroom, and the available MyFord Touch infotainment system is perfect for owners who crave the latest technology at the touch of a finger.

All 2013 Ford F-150 trims come standard with four-wheel antilock disc brakes, stability control, trailer sway control, front-seat side and full-length side curtain airbags. The Ford SYNC system also comes with an emergency crash-notification feature that can automatically dial 911 when paired with a cell phone. The F-150 received 4 out of 5 stars in overall protection in government crash tests as well as the highest overall score of “Good” in frontal, side, and roof-strength tests by the Insurance Institute for Highway Safety.