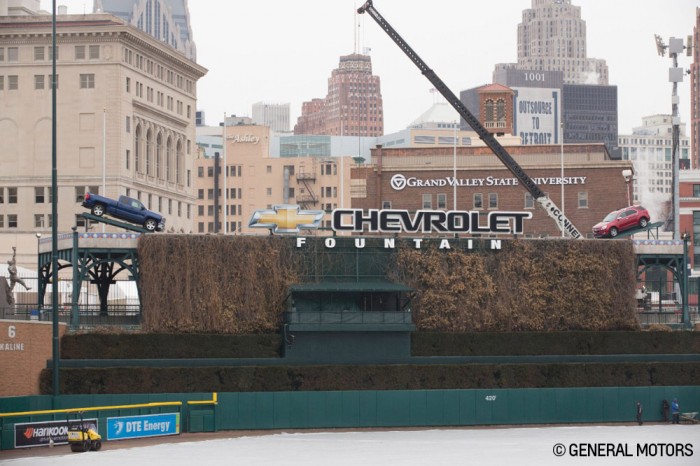 A 2014 Silverado and Equinox were mounted up in Comerica Park last Thursday for Opening Day of Major League Baseball.

Football may pull in more viewers, and the Olympics may be valued for their unity. But baseball is still our nation’s pastime and a highlight of the spring and summer seasons. While many look to Opening Day to herald in the new season of homeruns and crackerjacks, seeing the 2014 Chevy cars in Comerica Park atop the Chevrolet Fountain is the real sign that baseball is here to stay for many fans this year.

This year’s vehicles include a Crystal Red Metallic Equinox and a Blue Topaz Silverado. Both were hoisted up to their parking spaces atop the Chevy-sponsored fountain last Thursday.

“Chevrolet is the Official Vehicle of Major League Baseball and what better symbol can there be than having our vehicles in such a prominent place in our hometown stadium?” asked Paul Edwards, vice president, Chevrolet marketing.

Hoisting Chevys above the fountain at Comerica has become a yearly tradition. In fact, Chevy has sponsored the fountain for the last five seasons, and with good reason: the fountain is absolutely awesome. It boasts really cool water displays and a loud tiger growl each time the Detroit Tigers hit a homer.

In years past, the vehicles on display have been pre-production and non-saleable. This year, however, the Silverado and Equinox will be detailed and updated and then sent off to a dealer auction. Let’s just hope not too many birds treat them as their own personal toilets in the meantime.