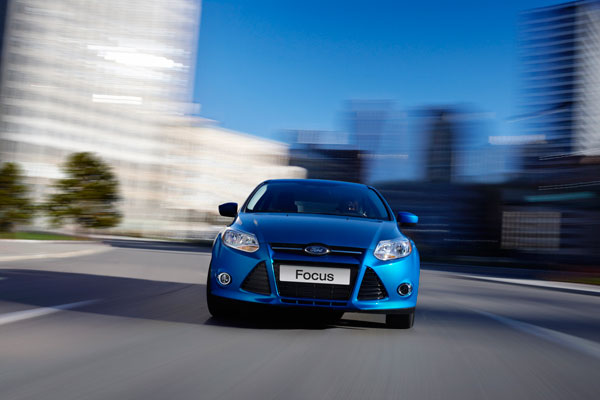 The 2014 Ford Focus is as efficient as it is stylish.

The 2014 Ford Focus is available as either a sedan or a four-door hatchback. Regardless of the model, each flaunts the bold Ford grille, which is similar to that on the Focus’s larger cousin, the Fusion. The sculpted lines of the 2014 Ford Focus give the sporty compact a bold and aggressive stance that was designed to attract younger car-buyers.

The 2014 Ford Focus is powered by a standard 2.0-liter four-cylinder that generates a surprising 160 horsepower and 146 lb-ft of torque, which propels the Focus from 0-60 mph in 8.3 seconds – a mark that is above average for the segment.

Catering to the highly-coveted young car-buyer does not end with sporty design and impressive fuel economy; they want technology, and the 2014 Ford Focus delivers. The available Ford MyTouch system with Sync allows drivers to access all of their favorite entertainment on the smartphone through voice commands or the 2014 Focus’s large touchscreen.

Small vehicles can be a dangerous place to be in the event of a collision, but that doesn’t apply to the 2014 Ford Focus and its extensive list of advanced safety features, which includes ultra-high-strength boron steel-reinforced safety cage construction and standard front seat-mounted side and driver’s knee airbags.