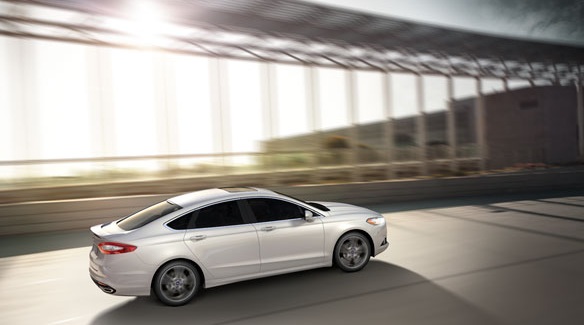 The 2014 Fusion will see only a few minor changes with a new 1.5-liter four-cylinder engine option and new features, such as inflatable rear seatbelts, a heated steering wheel, and ventilated front seats.

With a sleek silhouette and distinctive styling, the 2014 Fusion model has a more modern look than before. A smooth transition from front to back allows for prime aerodynamics, adding to the car’s fuel efficiency, while the bold grille gives the Fusion a unique look that no one will forget.

Whether you’re looking for fuel economy or power, the 2014 Ford Fusion will have it all. Drivers can choose among the standard 2.5-liter DuratecÒ I-4 engine to three different EcoBoostÒ engines—1.5-liter, 1.6-liter or the 2.0-liter— that all give the Fusion a significant boost of power and great fuel efficiency. Add the Hybrid and Plug-In Hybrid powertrain options, which run off a combination of electric motor and gasoline-fueled 2.0-liter Atkinson-cycle I-4 engine, and there’s a little something for everyone!

When the 2014 Fusion was being designed, fuel efficiency seemed to be the key phrase the engineers kept in mind. The standard fuel economy according to the EPA stands at 26 mpg combined, though the number can differ depending on the powertrain you choose.

If you’re looking for something that’s a bit more eco-friendly, look no further than the cabin of the 2014 Fusion. With seats that are not only luxurious, but also eco-conscious—made with REPREVEÒ, which is made out of 100% recyclable materials—the Fusion makes sure it gives back to the environment. Comfort is also a goal for the 2014 model with available heated and cooled front seats with multiple different settings and a heated steering wheel.

The 2014 Fusion received five out of five stars for overall crash protection and frontal protection, and four stars for side protection, from the National Highway Traffic Safety Administration, while also achieving the highest possible rating of “Good” from the Insurance Institute of Highway Safety.