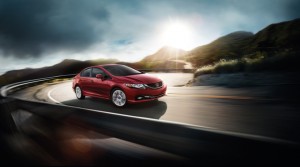 Upgraded interior and more powerful engine are just a few things that consumers can expect to see on the 2014 Honda Civic Sedan.

The 2014 model year is the year of change for the Honda Civic sedan with slightly upgraded interiors and more powerful engines, while the previous automatic transmission has been replaced by a continuously variable transmission. More upscale features also make their debut with keyless ignition, a larger touchscreen, better smartphone integration, and a blind spot camera.

In order to keep the Civic as one of the top performers in its class, Honda has made sure to make the 2014 Civic more appealing than ever before. Sleek lines make a smooth transition from the front of the car to the back, while the appealing front façade gives the Civic sedan an elegant silhouette. The compact car comes with four different body trims with the LX, EX, EX-L, and HF.

A standard 1.8-liter four-cylinder engine puts out 143 horsepower for the 2014 Civic, while the Civic LX sedan offers either a five-speed manual transmission or an optional CVT. The EX, EX-L, and HF sedans all come standard with the CVT.

The CVT will help the LX, EX, and EX-L to maintain an estimated 33 mpg combined, while the Civic HF gets an even better 35 mpg combined. Information on the 2014 Honda Civic Hybrid, Natural Gas, and Si powertrains has yet to be released.

Technology is all the rage in the 2014 Honda Civic sedan with push button start, steering wheel-mounted controls, and rearview camera, among others. The materials are premium-looking surfaces, while the cabin’s controls are well-placed and easy to reach while you’re driving. Honda’s most recent HondaLink system, which operates through the touchscreen, provides voice control for a variety of functions.