Driven by the all-new 3.0-liter EcoDiesel V6 engine, the 2014 Ram 1500 EcoDiesel has claimed its spot as the pace-setter for fuel economy in the half-ton pickup segment. The EPA has tested and rated the new Ram truck at 28 miles per gallon highway and 23 miles per gallon combined, making it the best full-size pickup ever tested. 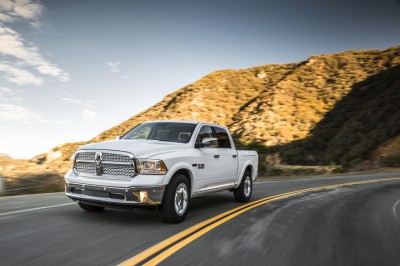 l truck’s EPA rating is good enough that it achieves better fuel economy than even the top-ranked small pickup truck on the market. What’s more, the version equipped with the gasoline-powered 3.6-liter Pentastar V6 remains at the top of the segment, which was a considerable factor in the Ram 1500 winning 2014 Motor Trend Truck of the Year two years running.

In addition to the EcoDiesel V6, which was among Ward’s 10 Best Engines in 2014, the Ram 1500 EcoDiesel also benefits from active grille shutters for better airflow and aerodynamics, Electric Power Steering (EPS), and lightweight materials in its construction. The Ram 1500 EcoDiesel, the first half-ton in the American market with a small-displacement turbo-diesel engine beneath the hood, is available for pre-order now.

If you plan on upgrading to the EcoDiesel-equipped Ram sometime this year, we want to know what you find most compelling about this particular truck. Leave us a comment and let us know what you think!