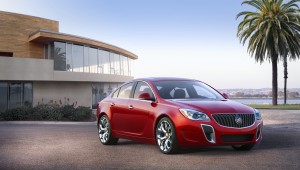 Do you agree with this 2014 Regal GS Review?

Throughout the forty years in which Buick has offered the Regal, the vehicle has been known as a powertrain innovator, a designation that is set to continue with the introduction of the 2014 Buick Regal GS.  The newest Regal offers the best of two worlds to Buick drivers across the country with more fuel efficiency than ever before and just as much speed as the previous model.

Buick hopes to help younger generations of drivers realize that the Regal is no longer their grandmother’s car, and nowhere is this more apparent than it is in the 2.0-liter turbo 4-cylinder engine that boasts 259 horsepower.  The Regal GS boasts an impressive 0-60 time of 6.3 seconds, yet still offers drivers a none-too-shabby 29 miles per gallon highway, giving drivers the best of both worlds when it comes to power and proficiency.

With sleek styling that moves away from its boat-like ancestors, the 2014 Regal GS is more aerodynamic and modern than ever before.  Its interior has also seen significant updates, including a standard 8-inch color touch screen with great apps integration and some newer, high-end looking materials to help enhance the Buick Regal ride experience.

Do you think the 2014 Buick Regal GS is a leading performance sedan? Tell us what you think below!