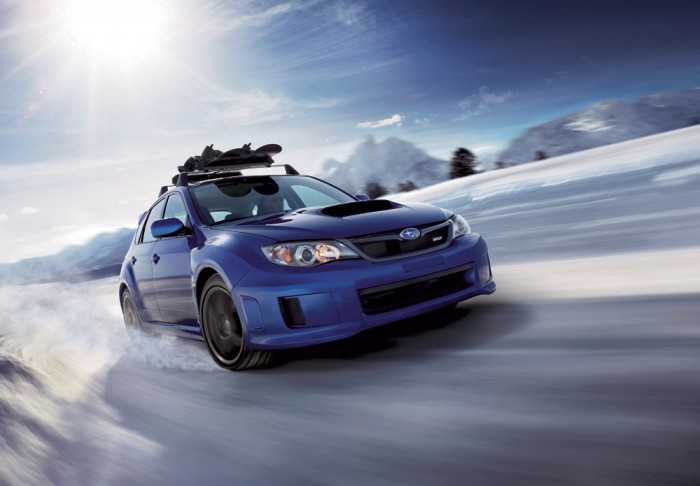 If you’re looking to build a fast car, it’s important to translate that to the exterior. With an obvious hood vent and a prominent spoiler (on the sedan model), the 2014 Subaru Impreza WRX makes sure you understand just how much power is lying underneath its hood. Whether it’s the sedan body or the hatchback, there’s no denying this is the type of car you’d want to take with you to a street rally.

A turbocharged 2.5-liter, horizontally opposed four-cylinder boxer engine powers the 2014 Impreza WRX, churning out 265 horsepower and 244 lb-ft of torque. A standard five-speed manual sends power to the all-wheel-drive system, allowing the WRX sedan to reach 60 mph in 5.3 seconds. The STI model has a slightly tweaked version of the same engine, pushing out 305 hp and 290 lb-ft of torque. Rather than a five-speed, the STI comes with a standard six-speed manual.

EPA-estimated fuel economy for both the sedan and hatchback WRX is rated at 21 mpg combined, while the STI comes in a bit lower at 19 combined.

A simple and straightforward cabin design makes sure your attention is focused on what’s important—the WRX’s power. A touchscreen interface provides easy access to the navigation system and the audio system, though it can be complicated to operate at times. There is plenty of room on the inside however, making it easy to fit both passengers and cargo.

The Insurance Institute for Highway Safety found the regular, non-WRX versions of the Impreza to be worthy of their highest possible rating of “Good” in the moderate-overlap frontal-offset, side-impact, and roof strength tests. You could expect similar results from the WRX due to the cars’ similar features.