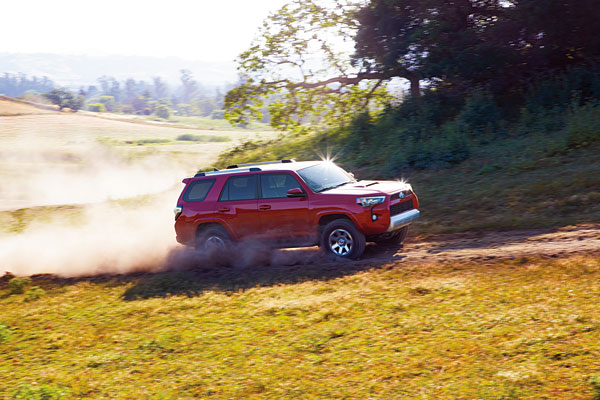 For the 2014 model year, the Toyota 4Runner has updated styling both inside and out, along with new headlights. All trim levels now come standard with a touchscreen-based audio system, Toyota’s Entune apps, and a rearview camera. The standard equipment has also seen some minor changes.

Rugged is the best adjective to use when describing the 2014 Toyota 4Runner, which features a redesigned, bold front end that makes you want to take it for a ride off road. Hard body frame angles and distinct lines create a no-nonsense type of feel, while the brand new projector-beam headlights make sure to light up the path before you more than ever before.

A 4.0-liter V6 engine that gets 270 horsepower and 278 lb-ft of torque powers the 2014 4Runner, while a five-speed automatic comes as the standard transmission. The SR5 and Limited models have the option of rear-wheel-drive or four-wheel-drive, while the Trail model is four-wheel-drive only. With the proper equipment, the 4Runner can tow up to 4,700 lbs and reach 60 mph in 7.2 seconds.

A new instrument panel is the highlight of the 2014 4Runner’s redesigned interior, with an oversized speedometer and tachometer sandwiching a multifunction screen trip computer. These updated gauges are easy to use and read, creating a pleasant experience while driving. There’s also a new touchscreen audio interface on the center stack that features a varying degree of technologies depending on the trim level you’ve chosen. Rear seating in the second-row seat has plenty of room, though the optional third-row seat can be a bit tight.