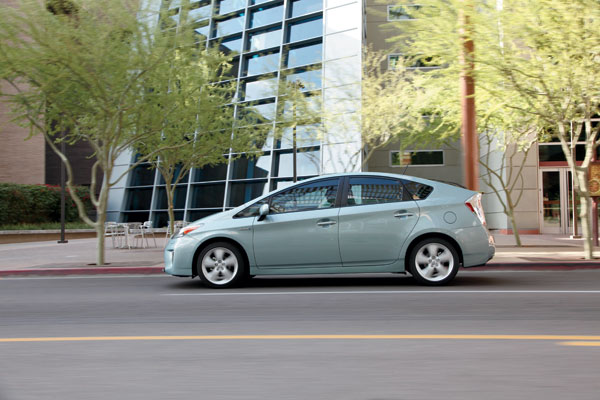 There are no notable changes for the 2014 Toyota Prius with the exception of the Persona Series Special Edition no longer being produced.

The Prius is bringing back its iconic hatchback exterior for the year 2014 with nearly indiscernible changes. The modern silhouette of its front transitions into its boxy rear, creating a very distinct look that has quickly become its signature.

With a hybrid powertrain powered by a 1.8-liter four-cylinder engine and a pair of electric motor/generators, the 2014 Prius is able to push out 134 horsepower, creating the perfect balance of eco-friendliness and power. The powertrain has been able to clock a 10.1 second 0-60 time, a touch lower than the C-Max Hybrid, but impressive nonetheless.

Fuel efficiency is where the Prius really impresses with an EPA-estimated 50 mpg combined, making it the perfect car for a daily commute.

The interior of the 2014 Prius screams stylish practicality with controls that jut out toward the driver in a “floating console” with a nice little storage tray underneath for all those CDs you might have. The instrument panel displays audio, temperature, and trip computer information that the driver can control on the steering wheel. A standard touchscreen makes using the Entune system in the Prius fun, safe, and easy.

Both government crash tests and the Insurance Institute for Highway Safety (IIHS) have found the 2014 Toyota Prius a top-notch contender in safety with a five-star overall rating from the government and the highest possible rating of “Good” from the IIHS.