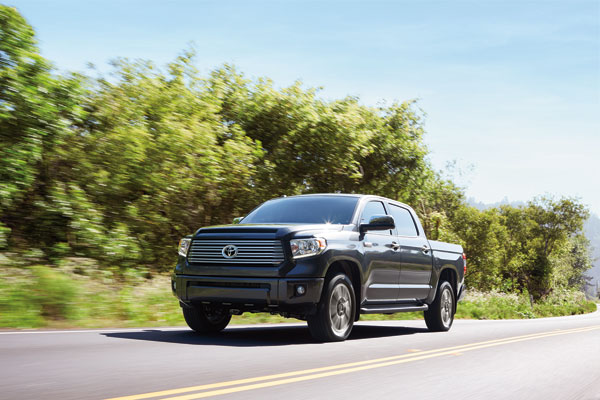 The 2014 Toyota Tundra might have all the pinning’s of a truck on the outside, but on the inside, there lies the heart of a workhorse ready to do anything to succeed. With a revamped exterior design that adds a bit of beef to the frame and an interior that has more technology than ever before, the 2014 Toyota Tundra is the perfect truck for the driver looking for the traditional.

Gone are the rounded corners and soft lines of the previous Tundra models—in its place lies chiseled, straight lines that add a rougher, tougher feel to the 2014 model. In addition to these sculpted new features, the Tundra has a higher hood and a larger, more prominent grille. Inside the cabin, the center stack is now closer to the driver than before and features Toyota’s Entune smartphone-connected services, making the Tundra more relevant in the full-size truck segment than ever before.

If you expected the exterior redesign and additional technology to be more extensive, keep this in mind—the Tundra is made for those drivers who care more about what’s inside than out. It has performance in spades. With three different body styles and five trim levels to choose from, there is a Tundra for every driver. The driver can also choose from three different engines, each of which comes with a single rear axle ration, allowing you to easily configure a truck for your specific needs.