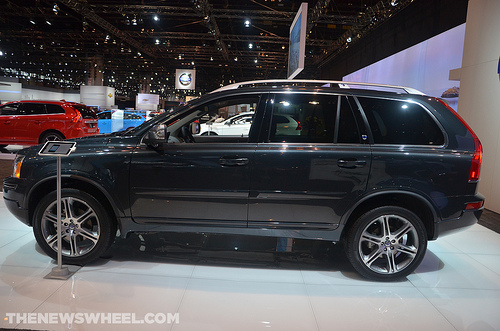 Relatively untouched since the last model year, the 2014 Volvo XC90 still uses angular lines and rough edges to create a rugged look typically seen in the Volvo lineup. Include the traditional Volvo grille, and there’s no denying what brand this crossover SUV belongs to.

A 3.2-liter inline six-cylinder engine powers the 2014 XC90, churning out 240 horsepower and 236 lb-ft of torque. The only transmission offered is a six-speed automatic with manual shift control, while front-wheel drive is standard with an optional all-wheel drive available. If it’s got the right equipment, the Volvo XC90 can tow up to 3,970 pounds.

While the infotainment system offered in the 2014 XC90 isn’t up to par with other Volvos, the stylish interior makes up for it with well-placed, user-friendly gauges and controls and a sleek, modern design that oozes quality. Passengers in the second and third rows might find themselves a little cramped, but the standard child booster seat built into the center section of the second-row bench makes up for a little less room.

Safety is a priority at Volvo, which can be seen in its highest possible rating of “Good” from the Insurance Institute for Highway Safety crash tests. Standard safety features for the crossover include antilock brakes, stability control, front-seat side-impact airbags, full-length side curtain airbags, anti-whiplash front seats, and a booster seat for a child fit into the center position of the second row. Optional safety technologies include a rearview camera and a blind-spot warning system.