2015 Chevy Colorado Is “Back in Black” for New Car Commercial 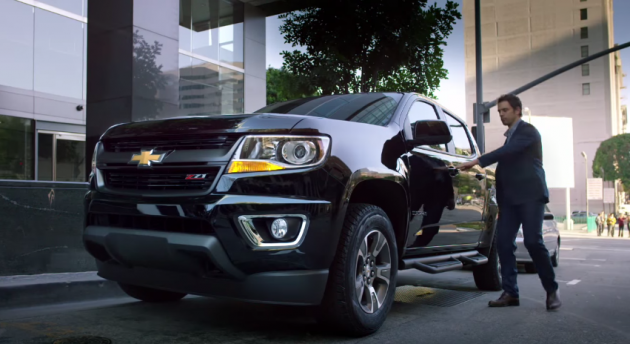 A super-cool “Truck Guy” gets into his all-black 2015 Chevy Colorado, set to the music of AC/DC

A new car commercial from Chevrolet spends a little bit of time bragging about how the Colorado was named the 2015 Motor Trend Truck of the Year, and a lot of time promoting Chevy’s conception of “truck guys” as inherently superior to all other motorists. And it does so by enlisting the aid of two very different musical acts: AC/DC and The Carpenters.

Take a look for yourself:

The ad begins by showing us a dull, sad-sack corporate employee driving to work in a boring economy car and listening to the 1971 soft rock single “Rainy Days and Mondays” by The Carpenters (probably on a cassette tape, the pathetic bastard). The dreary theme song seems to follow him into the office, defining who he is as a human being. He rides the elevator up to his cubicle in lonely misery, as a muzak version of “Rainy Days” scores the soundtrack of his hollow existence.

Then comes the “Truck Guy,” a dark-haired stallion with a little more than just a 5 o’clock shadow, whose arrival into the elevator is heralded by the strains of AC/DC’s 1980 classic “Back in Black.” Unlike that lame Carpenters fan, he isn’t even wearing a tie, because you can’t lasso this stud. His unbuttoned collar and lack of undershirt are a defiant “screw you” to The Man, as is the fact that he appears to be leaving the office at 9:15 am.

As he gets off of the elevator, a blonde-haired woman looks lustily at him – because he is handsome, yes, but also because he’s a Truck Guy, and she can sense his inner truckness. As the car commercial comes to a close, the Truck Guy climbs into his award-winning 2015 Chevy Colorado before riding off into the sunset to have sex with your mom.

At least, that’s what we felt was implied. This is, after all, a relatively subtle car commercial.