Ford Calls The 2015 Edge “A Better Vehicle By Every Measure” 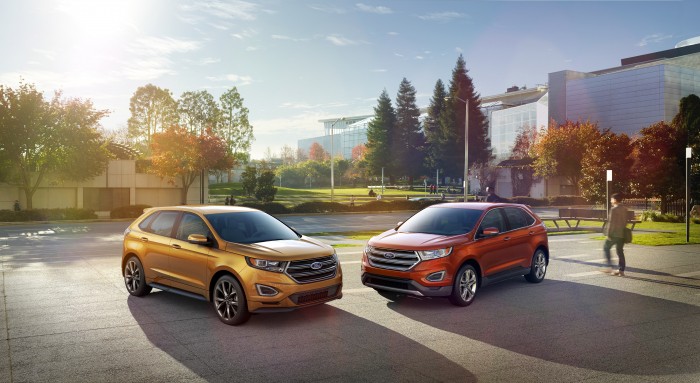 Usually, when an automaker promotes a new model, they’ll try to steer clear of besmirching the name of its predecessor so as not to potentially torpedo its sales. Ford just revealed the 2015 Edge, which has been in the pipeline for some time now, and they didn’t much care to restrain themselves. They took the upcoming model, held it up against the model that is currently on the market, and said the following: “The 2015 Ford Edge is a better vehicle by every measure.”

That’s a declaration if we’ve ever heard one.

“The original Edge was our first entry into the world of crossover utilities – a technologically advanced vehicle that was the perfect blend of sedan comfort and efficiency with SUV functionality,” said Raj Nair, group vice president, Global Product Development. “Now, we are building on that success, and building on the emotional appeal of the vehicle by offering more of the technology our customers want in a package that meets the highest expectations for quality and craftsmanship.”

The new Edge will use the same platform as the Fusion and boasts a redesigned body structure and front and rear suspension that helps absorb noise without stifling the way the Edge handles.

Perhaps most importantly, the new 2015 Edge will be the first Ford to use the adaptive steering technology that was announced earlier in the month. It will be standard at the Edge Sport trim level.

Gallery: Your First Look at the 2015 Edge

Check out The News Wheel of everything you need to know about the 2015 Ford Edge.

The 2015 Ford Edge is offered with three different engine options: a twin-scroll 2.0-liter EcoBoost® four-cylinder, a 2.7-liter EcoBoost V6, and an aspirated 3.5-liter V6 engine. All will be mated to a six-speed Ford SelectShift® automatic and utilize dual output exhaust.

For the full details on the 2015 Edge, check out Ford’s press release, and keep an eye on The News Wheel for more information as it develops.