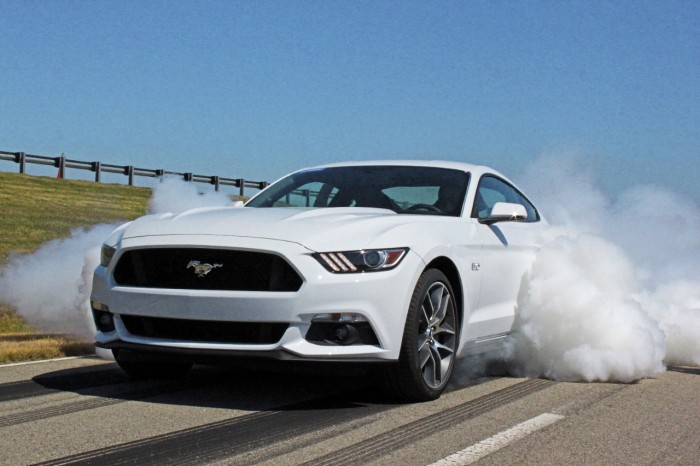 April 17 may have come and gone, but we’re not done drooling over Mustangs quite yet. (Will we ever be?) The latest Mustang news concerns one of the latest Mustang models—the 2015 Ford Mustang. According to Ford, every new 2015 Mustang GT will feature electronic line-lock for improved performance on the drag strip.

The 2015 Ford Mustang GT line-lock feature is an industry first and will give diehard Mustang fans the benefit of a mechanical system for drag racing, without having to perform any modifications on the brakes.

“Competition has been an integral part of the Ford Mustang lifestyle since its earliest days 50 years ago,” said Steve Ling, Ford car marketing manager. “We know our customers, and we wanted to provide a unique feature for those wishing to take full advantage of the increased capability offered by this new Mustang GT at the drag strip.”

Dave Pericak, Mustang chief engineer, added, “We’re using advanced controls technology for the all-new Mustang to provide some of our most dedicated fans with an industry-first feature they can use when they go to the track. With electronic line-lock, customers who drive their Mustangs to work all week and then compete on the weekends will appreciate not having to modify their brake systems to be able to do effective tire prep at the drag strip.”

The monstrous rear-wheel-drive Mustang has been a long-time favorite at the drag strips, particularly in bracket racing. The electronic line-lock feature, along with launch control (also standard on the Mustang GT with manual transmission), will help drivers get a more consistent performance from race to race.

If a driver enables the 2015 Ford Mustang GT line-lock technology and releases the brake pedal, the hydraulic control unit for the stability control system releases the rear brakes but keeps the front brakes locked. That means that while the driver waits in the burnout box of the drag strip, he or she can hit the accelerator to run the tires and heat them up before the race, providing maximum grip. Once the tires are warmed up, the driver can then proceed to the starting line, turn on launch control, and rocket like a drag star legend when the race begins.

“Whether a customer wants to take weekend road trips, go road racing or compete in grassroots drag racing, we aim to maximize the driving experience for everyone,” said Pericak. “Mustang offers selectable drive modes for those who prefer to compete on road courses or in autocross events, so when we realized we could provide a really cool feature like electronic line-lock that no one else offers, the decision was easy – ‘Let’s do it!’”

Ford does warn that the 2015 Ford Mustang GT line-lock feature should only be used on racetracks. Racing the Mustang GT will void the warranty.