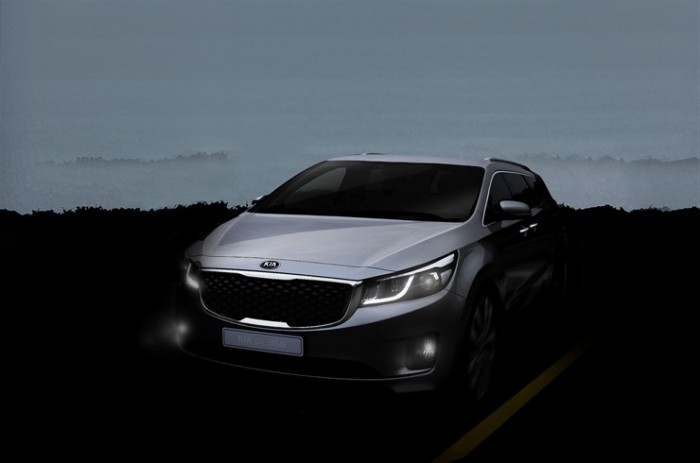 A 2015 Kia Sedona teaser was released ahead of the upcoming auto show.

Kia Media unveiled a 2015 Kia Sedona teaser yesterday ahead of the New York International Auto Show. While Kia didn’t explicitly say it’s a Sedona, it’s pretty obvious by the picture. The automaker called it an “all-new multi-purpose vehicle,” which, in other words, is a *cough* minivan *cough*. Come on, Kia, you’re fooling no one.

It’s hard to get too worked up about a minivan, especially one as bland and unimpressive as the Sedona. But by nature, I try to be optimistic, so perhaps the totally revamped Sedona really will “challenge the segment,” as Kia’s release promises—although, I’m not sure that anyone will care about a vehicle challenging the minivan segment because, well, nobody even cares about the segment itself. (Okay, so maybe I’m not by nature optimistic.)

The 2015 Kia Sedona teaser promises total functionality in transporting eight passengers and their cargo. It also states that the Sedona will be appealing to adventure seekers, because nothing says bold and daring like a vehicle with hidden cup holders and a cooler full of juice boxes in the trunk.