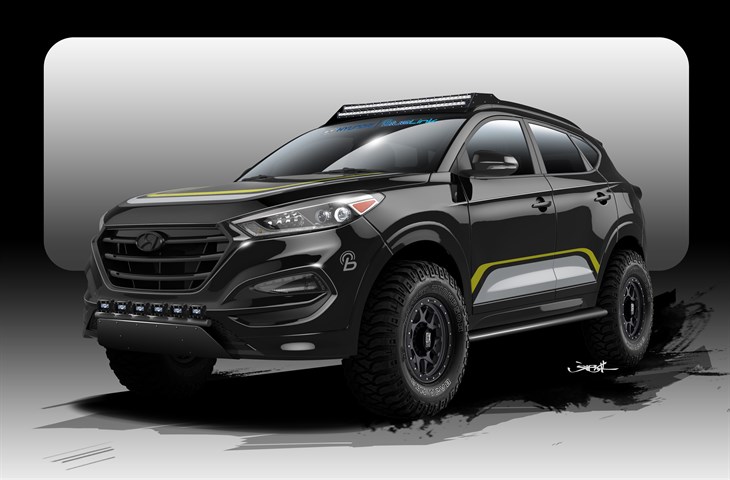 We’ve already heard the details on another version of the Hyundai Tucson appearing at the 2015 SEMA Show in November: the 700-horsepower machine from Bisimoto Engineering. While that modified SUV-turned-ute might be geared for serious track performance, it’s not a model you’d take off the track.

That’s why Rockstar Performance Garage (RPG) had an entirely different vision of the 2016 Hyundai Tucson. The off-road specialists have teamed up with the Korean brand for the first time to debut a crossover fit for any terrain.

Here’s what we know about the adventurous black-and-yellow vehicle.

The most attention on the SEMA-ready Tucson from RPG was given to the suspension, rising six inches over stock height–with improved shocks and wheel well space. Special LED lights have even been added to provide light where there is none.

The powertrain of this special Tucson is getting a Mishimoto 2.5-inch stainless steel down pipe and charge pipe, Turbonetics Godzilla blow-off valve, Rockstar Energy-licensed/Mishimoto Billet oil catch can, K&N Filters custom air intake, and plenty of other doohickeys. Outside, the SUV has everything from King Shocks struts/springs/shocks to Black Ops 4×4 body clearancing and KMC 17-inch “Bully” off-road wheels to keep it running off the street. Inside, drivers will rock out to a Kicker Audio sound system.

“The focus behind this build was to create an off-roader that nobody expected,” explained Nic Ashby, owner of Rockstar Performance Garage. “The Tucson was a great starting platform with its rigid frame and plenty of room in the engine bay for modifications. With the complete suspension overhaul and blacked-out appearance, this Tucson is guaranteed to be a head turner in line with the Rockstar lifestyle.”

We’ll be following #HyundaiSEMA for the inside scoop on all the brand’s activities at the 2015 SEMA Show in Las Vegas.