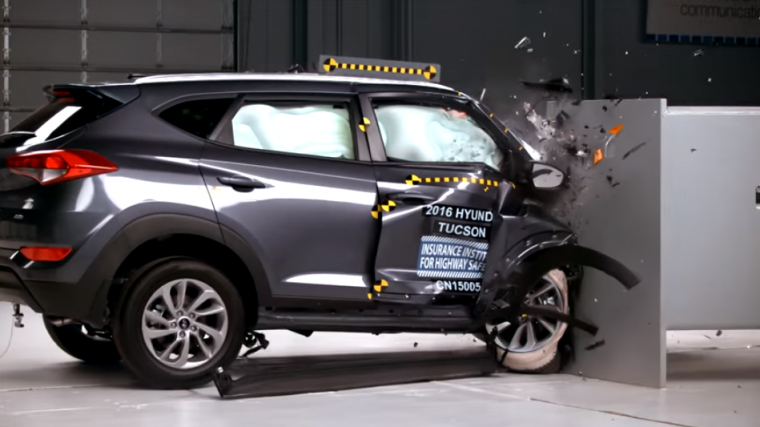 The 2016 Hyundai Tucson was the only small SUV out of seven tested by the Insurance Institute for Highway Safety (IIHS) to receive Top Safety Pick+ honors, as well as earn a “Good” rating for passenger protection in the small-overlap test.

To qualify as a 2016 Safety Pick+, a vehicle is required to earn good ratings in the five crashworthiness tests, which are the small overlap front, moderate overlap front, side, roof strength, and head restraints, as well as receive an advanced or superior rating for front crash protection.

Looking For A New Car? Check out these current offers and promotions for 2016 Hyundai models

Out of the seven small SUVs tested by the IIHS, the 2016 Hyundai Tucson was the only one to earn “good” scores for driver and passenger safety in the difficult small overlap test. In addition, the Hyundai Tucson’s front crash prevention system was given six points by the IIHS and its automatic braking system allowed the Tucson to circumvent accidents in the 12 mph and 25 mph tests.

In comparison, competitors such as the Mazda CX-5, Honda CR-V, and Buick Encore all earned ratings of “Acceptable” from the IIHS for passenger safety in the small overlap test. Furthermore, in the same tests, the Nissan Rogue and Subaru Forester were rated as “Marginal,” while the Toyota RAV4 earned a “Poor” rating.

The Basics of Car Waxing: Use these tips to leave your car shining