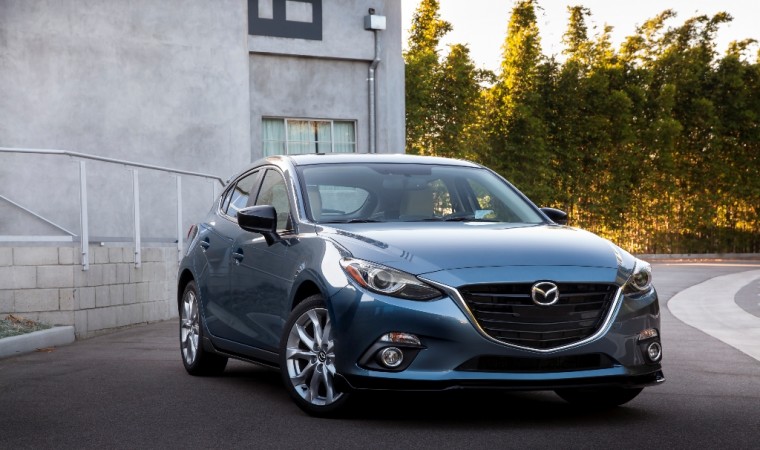 Ah, what a good-looking car. This sentiment, echoed across the minds of people everywhere while looking at new Mazdas, is repeated once more with this: the 2016 Mazda3–a universally-loved small, quick, and nimble vehicle, available either as a sedan or as a hatchback.

Mazda treats the hatchback and sedan versions of the Mazda3 as separate models; however, in the interest of space and convenience and due to their great similarities (except for rear configuration), we will discuss both in a single overview.

The 2016 Mazda3 comes in five trim levels: i Sport, i Touring, i Grand Touring, s Touring, and s Grand Touring. Each is available with optional i-ACTIVSENSE active safety features, more of which become available (or standard, in a few cases) as you look farther up the model tree.

UPDATE: Mazda has issued a recall on Mazda3 vehicles built between May 21 and August 24, 2015. In these vehicles, a defect in the safety shut-off valve may allow fuel to flow from the fuel tank into the charcoal emissions canister, leading to fuel leakage, increased risk of fire, and increased risk of engine stalling. Owners of vehicles subject to this recall will be notified by mail in early October, after which they may take their vehicle to a Mazda dealer, who will determine if the defect exists on the vehicle, and if so, offer a loaner vehicle while the faulty valve is replaced. 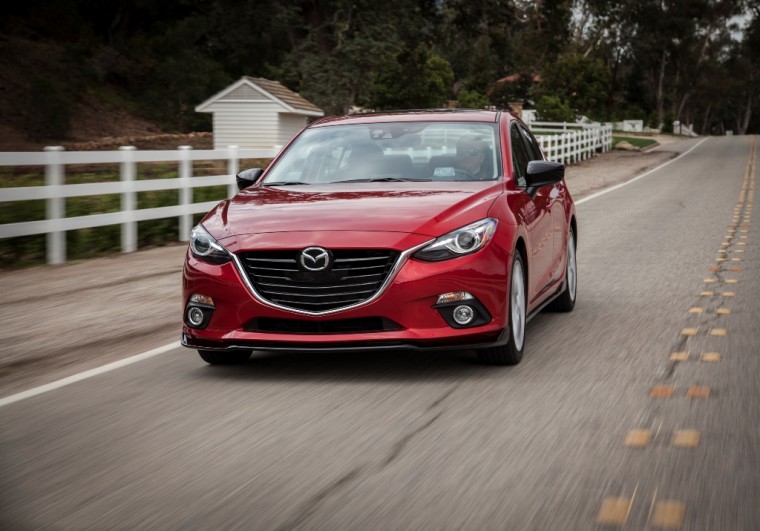 For 2016, Mazda dropped the SV trim level, so the lineup starts with the i Sport. In addition, Mazda has added rearview cameras to all Mazda3 models, as well as automatic headlights, automatic windshield wipers, and a sunroof on trims above the Sport. Finally, a manual transmission is no longer available for the s Touring trim. 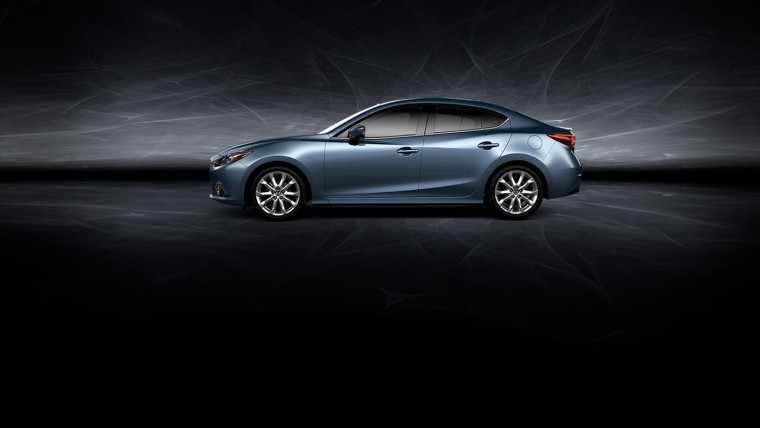 The Mazda3 is available as either a four-door sedan or a five-door hatchback except for the i Sport trim, which is only available as a sedan. Each Mazda3 features the longer nose and sweeping lines typical of Mazda’s KODO: Soul of Motion design language.

Exterior available on i Sport sedan:

Exterior available on i Touring sedan:

Exterior available on i Sport hatchback:

Exterior available on i Touring hatchback: 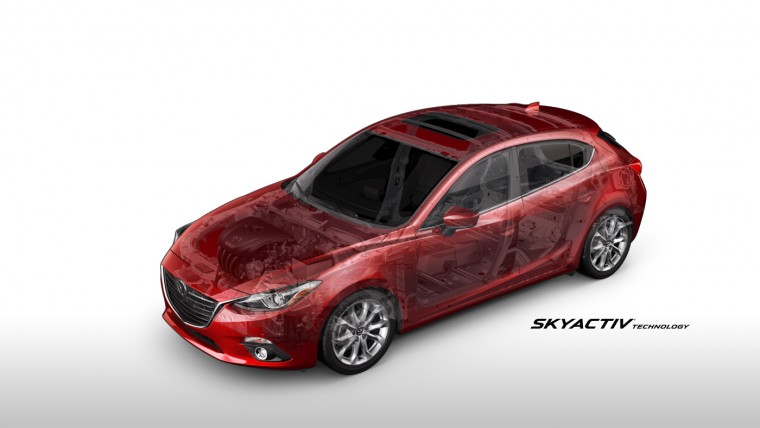 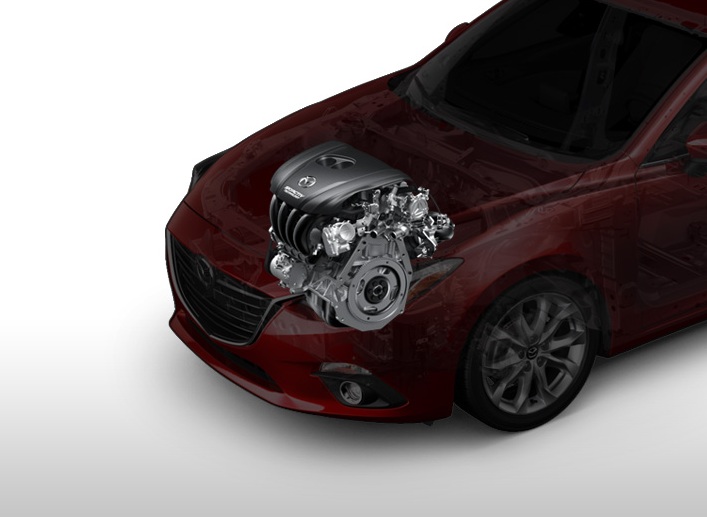 The Mazda3 comes with a number of different engine, powertrain, and body style combinations which affect fuel efficiency.

The Mazda3’s interior is highly praised, with Edmunds calling it one of the best in its class and Kelley Blue Book saying the interior is “among the best in layout.” In any case, interior layout attempts to put all controls in easy reach with steering-wheel-mounted controls and an all-controlling infotainment system (used either using a 7-inch touchscreen or a control knob in the center console, although the touchscreen is disabled while driving).

Cargo volume in the sedan is relatively small at 12.4 cubic feet, but that is fixed in the hatchback models, which expand cargo volume to 20.2 cubic feet (or 47.1 cubic feet with the rear seats down). Passenger space is also described as somewhat limited, and taller driver may find their hair coming close to the upholstery.

Interior Available on i Sport sedan:

Interior Available on i Touring sedan:

Interior Available on i Sport hatchback:

Interior Available on i Touring hatchback: 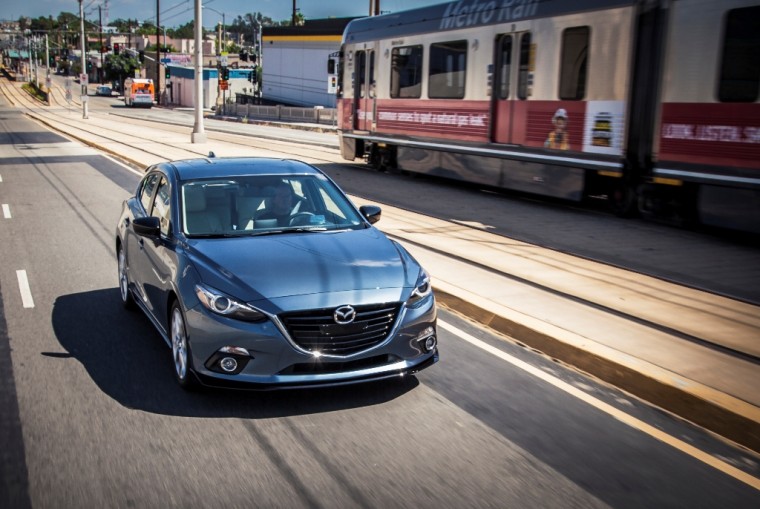 When it comes to safety, the Mazda3 is fantastic. Although the IIHS hasn’t gotten around to rating the 2016 Mazda3, in 2015 the IIHS gave the Mazda3 “good” ratings (the highest ratings possible) in every category and a rating of “Advanced” in Front Crash Prevention with optional equipment. Since the only safety-related change Mazda made was adding rear view cameras to each model, it is probably a safe bet that the rating isn’t going to slip for this model year.

The NHTSA has had a chance to look over the 2016 model, though, and gave both the hatchback and sedan the highest rating overall: five stars (five stars in front and side crash tests, with four stars in the rollover test).

For added safety, you can add a few i-ACTIVSENSE security features like Blind Spot or Rear Cross Traffic Alert in the lowest trim, all the way up to Radar Cruise Control, Forward Obstruction Warning, High Beam Control, Lane Departure Warning, and Smart City Brake Support in the highest trim.