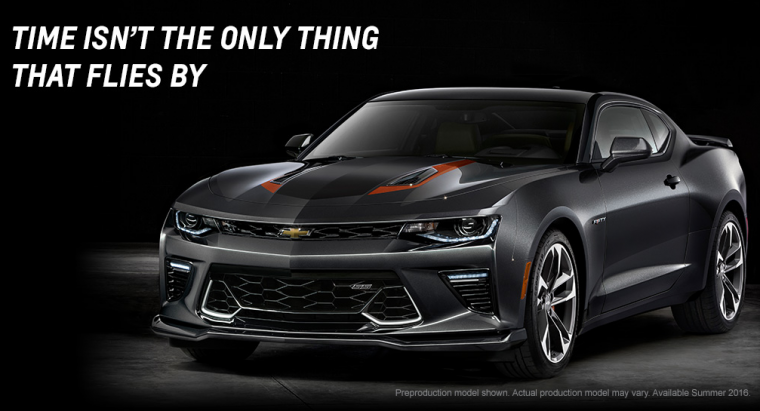 This year is the fiftieth anniversary of the Chevrolet Camaro—which is another way of saying that the classic rivalry between the Mustang and Camaro has now been going on for half as long as the famous Hundred Years’ War fought between France and England.

And make no mistake, when it debuted on September 26, 1966, the Camaro was indeed a declaration of war. When the automotive press asked Chevy product managers what the heck a Camaro was exactly, they defined it as a “small, vicious animal that eats Mustangs.”

So in much the same way that Ford unveiled a Mustang 50 Year Limited Edition model back in 2014, this year the bowtie brand will celebrate with a 2017 Chevrolet Camaro 50th Anniversary Edition.

Billed by Chevy as “the most epic Camaro yet,” the special 50th Anniversary Edition is distinguished by a cool Nightfall Grey paint job that’s accompanied by orange striping, satin chrome accents, and orange-accented brake calipers (front wheels only on the LT model). There’s also distinctive “FIFTY” badging on the car, as well as a unique grille design and specific 20-inch 50th Anniversary wheels and wheel center caps.

So basically, there’s going to be a lot of orange and black, which should make this vehicle perfect for the Cincinnati Bengals fan in your life (seriously, he could use the picker-upper).

The 2017 Camaro 50th Anniversary Edition will go on sale this summer, though no pricing details or official sales date have been revealed yet.